Phnom Penh is the capital of Cambodia, and almost everyone I met who had been there told me that for tourists it is not really worth a long visit. It is a big, chaotic and smelly city without many touristy things. However, for people who go there, there is one thing that is a real must see, although it is not exactly a beautiful attraction as the temples in Angkor Wat are. The sights in Phnom Penh are rather the places that remember the Khmer Rouge era, where the communist regime that ruled Cambodia between 1975 and 1979 killed almost 25% of its own population. So in this post I will tell something about this history, which is not something to make people feel good and happy, and it is a post with many words and not so many pictures (because I was busy digesting what I heard and saw instead of making pictures, and there are also not many good looking things to take pictures of), but I still wanted to tell about it because it is very interesting after all.

Tuol Sleng
There are two specific places that are typically visited and tell much about the events that happened in that time. I saw them both on my first day in Phnom Penh. The first place is the Tuol Sleng prison, better known as S-21, in the center of Phnom Penh. It had been a school before it was turned into a prison. That already tells a lot, because the Khmer Rouge where such fanatic communists that they wanted to turn the entire population of the country into rice farmers, in order to have a totally pure self-sustaining communist society without classes and any kind of commerce. They thought that for working in the rice fields people needed no education, so they abolished all schools and other education facilities.
When the Khmer Rouge conquered Phnom Penh in 1975 and took over the Cambodian government, they were welcomed by the population because this ended a civil war and swept away the highly corrupt previous government. However things changed quickly afterwards, because within 48 hours, the new government ordered the whole population to leave the city. Everyone should move to the countryside and was supposed to start working on the rice fields. Phnom Penh and the other big cities in the country where basically turned into ghost towns.

S-21 was a maximum security prison that housed thousands of prisoners that were in some way classified as dangerous for the regime, because they were too educated, had the wrong political views or whatever else. This could basically be anyone – over the years the regime got so fanatic that at some point you could even be imprisoned and executed for wearing glasses (because that showed you read much and are too educated) or for having hands without traces of hard physical labour.
Today, S-21 is a museum and in many places still looks like it did back then. At the entrance, you get an audio guide, and everyone walks on his own pace through the buildings. It tells the whole story of that place, which is simply horrible – you can see in the faces of many visitors that they have a really hard time to swallow what they hear. People were living in the prisons under terrible cirumstances, they were tortured in every possible way, and in the end no one was supposed to survive. Of the around 17,000 prisoners that had been in S-21 during those 4 years, only 7 survived. The other ones either died in the prison through torture or the living conditions, or were brought to a killing field to be executed there. Everyone who came into the prison was destined to die, and people were tortured so long until they admitted crimes that the regime had mostly made up, like being a CIA agent, or even simple things like being guilty of stealing food. 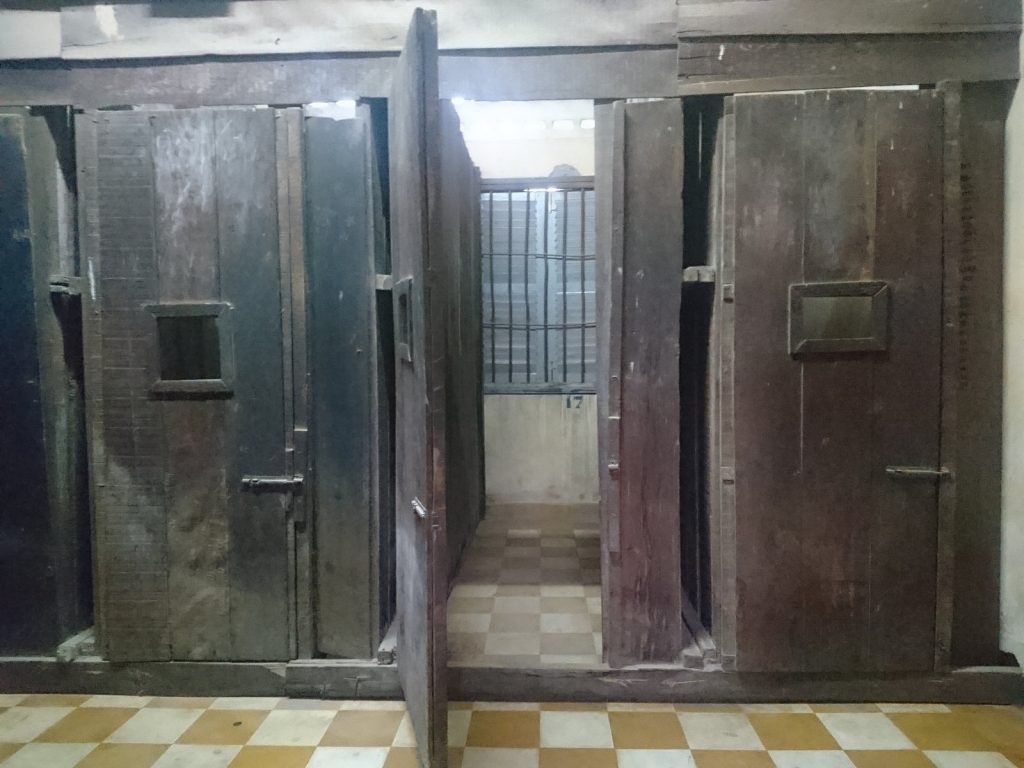 In these cells the prisoners were kept. There was barely room for lying down. Many other prisoners were just chained to the floor in a room without having any kind of own cell. 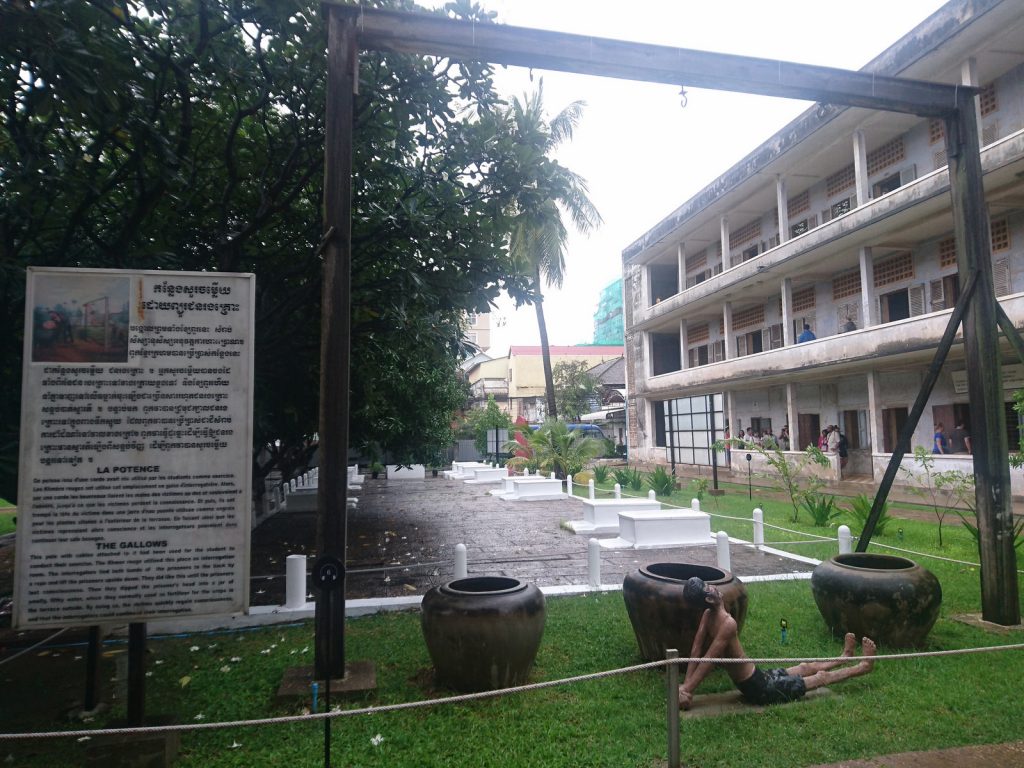 This looks like gallows, but it was not used to execute people, but rather to torture them while they were hanging there. If they lost consciousness, their heads were dunked into the containers underneath it, which were filled with all kind of waste and sewage, to wake them up again.

The latest addition to the museum were a couple of signs like on the following picture: It bans Pokemon Go playing from the museum. I don’t even know what to say about people who play this game in a place like this, so… no comment. 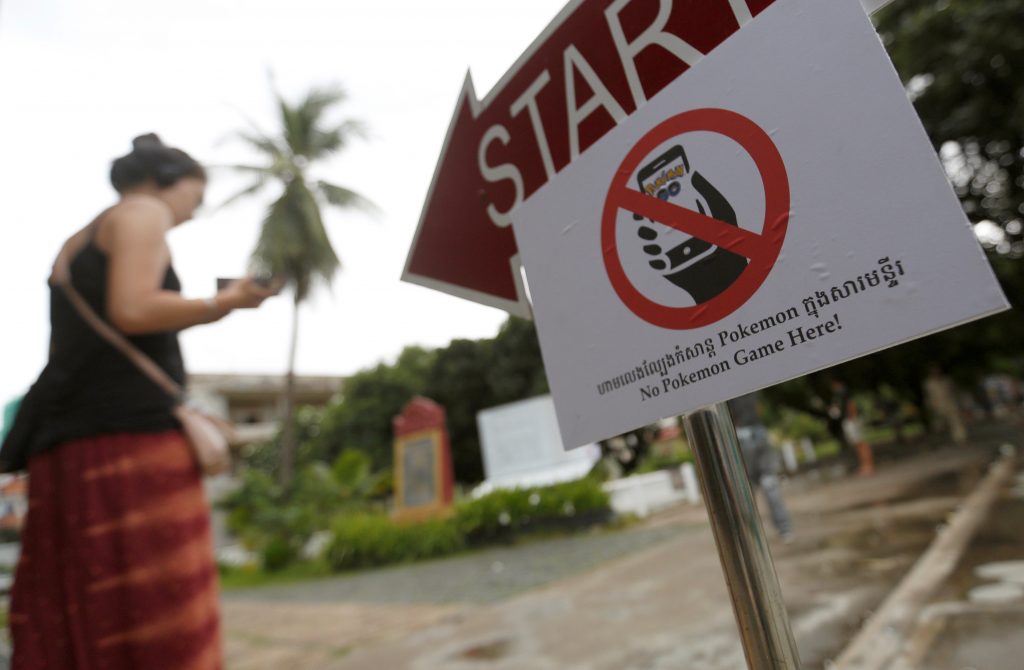 In the centre of the area, there was an old man sitting on a table, selling and signing books, and I realized that I had seen the face of this man several times on photos in the museum. 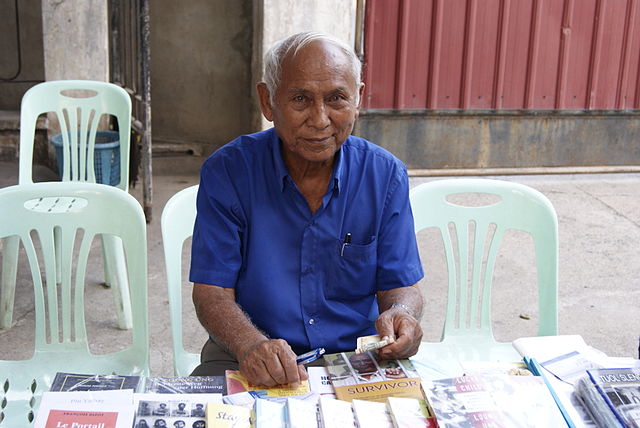 It is Chum Mey, one of the survivors of the prison. Apparently he sits there every day, or at least very often. He was a mechanic and only survived because his skills could be useful for the regime. He was still lucky with that – many mechanics and engineers were killed just because they had some kind of advanced education. This seems especially absurd because there were hardly any people left who knew about how to do agriculture properly, and without them, there were a lot of uneducated people from the countryside as well as city people who knew nothing about agriculture working in the rice fields. The Khmer Rouge simply gave the order that from one year to the next the rice producation had to be tripled, which of course didn’t work out at all.

Killing Fields
The other place that is visited is Choeung Ek, better known as the killing fields, a bit outside of the center of Phnom Penh. This is the place were prisoners from S-21 and other prisons where brought to after the decision had been made to execute them. There are actually many killing fields all over Cambodia, but this specific one has been turned into some kind of open air museum to show what happened in these places.
Shortly after the Khmer Rouge era ended, people discovered mass graves at the killing field site. It showed that thousands of people had been buried here. Every day, trucks full of people arrived at the site, most of them had been told that they are moved to a new prison. They were locked into a small house without windows, and at night they were taken out of the house, where executed and thrown into a big whole. They were either shot, or when there were no firearms available, killed with axes, knives, or any other working tools. During the executions loud propaganda music was played, so that the other prisoners would not hear the screams.

The place can be visited in a similar way as S-21, with a audio guide that tells you the story about it. Similar to S-21, it is a pretty tough to walk through the area. There are many holes in the ground where dead bodies had been excavated, boxes that show clothes of killed people, etc. On one specific point it even said that it was a mass grave for children, because when someone was executed by the regime, the whole family including the children was often killed as well, so that no one of the family could take revenge later. Still today, bones regularly appear from the ground, and there are signs that tell you that you should not remove bones by yourself when you see them. Every couple of months, workers of the museum walk around, remove the bones and examine them.

At the center of the site, there is a big monument that contains more than 5000 skulls of people who had been killed and later excavated here. 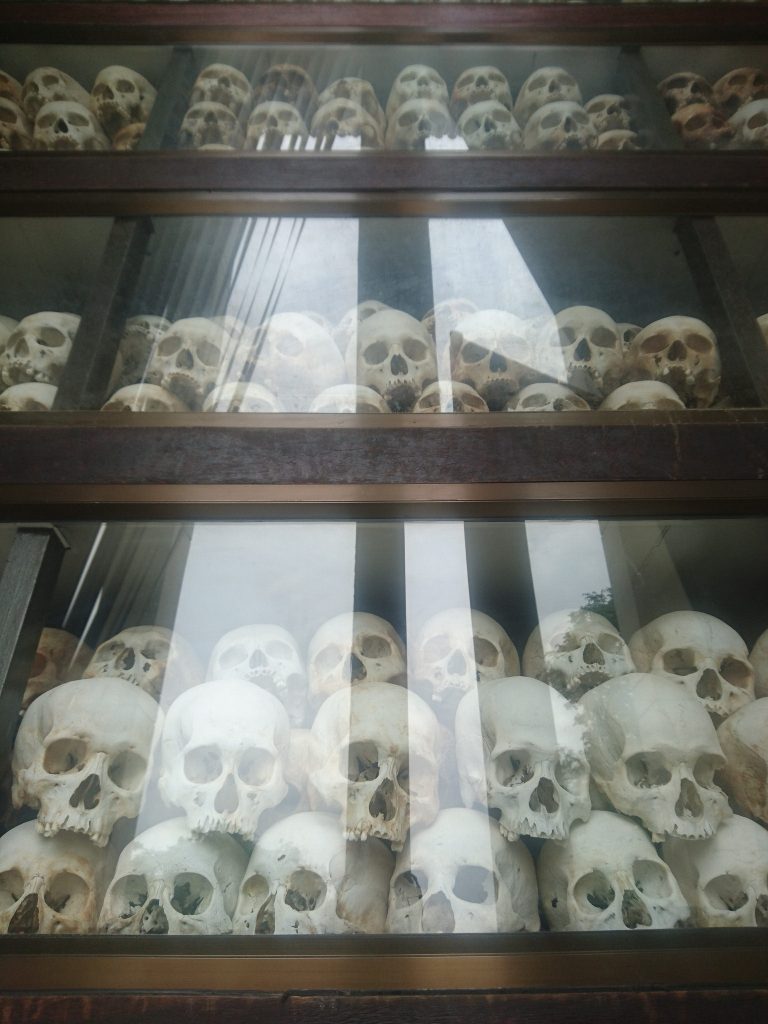 They are stacked on top of each other, amost 10 meters high.

At the end of the day, I had seen thousands of human skulls and hundreds of photos of dead or tortured people, and I definitely had enough of cambodian history for the day and felt pretty disturbed, as probably everyone else feels who visits these sights. It is definitely not an easy attraction to visit, but I think it should not miss on the itinerary of anyone who visits cambodia.

The Khmer Rouge era ended when they started to attack Vietnam, to which Vietnam responded with an invasion that quickly overthrew the regime in Phnom Penh. Vietnam installed a new goverment, and that was the end of the Khmer Rouge… well, not really. Because they retreated to the jungles and continued to fight for almost 20 more years against the new goverment. Only in the late 90s some of their leaders were arrested, and until today only 2 persons have been sentenced to prison. Some others are still on trial, and the Khmer Rouge leader Pol Pot died in the late 90s just before he was brought to justice.
A delicate fact about the whole story is that the western countries, especially the USA, kept on supporting the Khmer Rouge as the legal Cambodian goverment until the 90s. When I heard this at the end of the tours, I couldn’t really believe this. Apparently the reason for this is simply that the new government was backed by Vietnam, to which the USA obviously did not have a very good relation, so they preferred to support a genocidal terror regime rather than accept a government that was supported by their enemies.