I spent the first two weeks in China in Yunnan, a province in the extreme southeast of China, close to Tibet. Yunnan is kind of a link between China and South East Asia – the landscape is very similar to Laos, and there are a lot of ethnic minorities living in villages that look like they could also be in Laos or Northern Vietnam. It is also a big tourist destination for foreigners as well as Chinese, because of the beautiful landscape and the warm weather all year round.

Lijiang
Lijiang is one of the most popular destinations for chinese tourists due to its well preserved old town. And once I came there I immidiately saw why, because the old town is really picturesque, with old houses, cobblestone streets and bridges that are hundreds of years old. 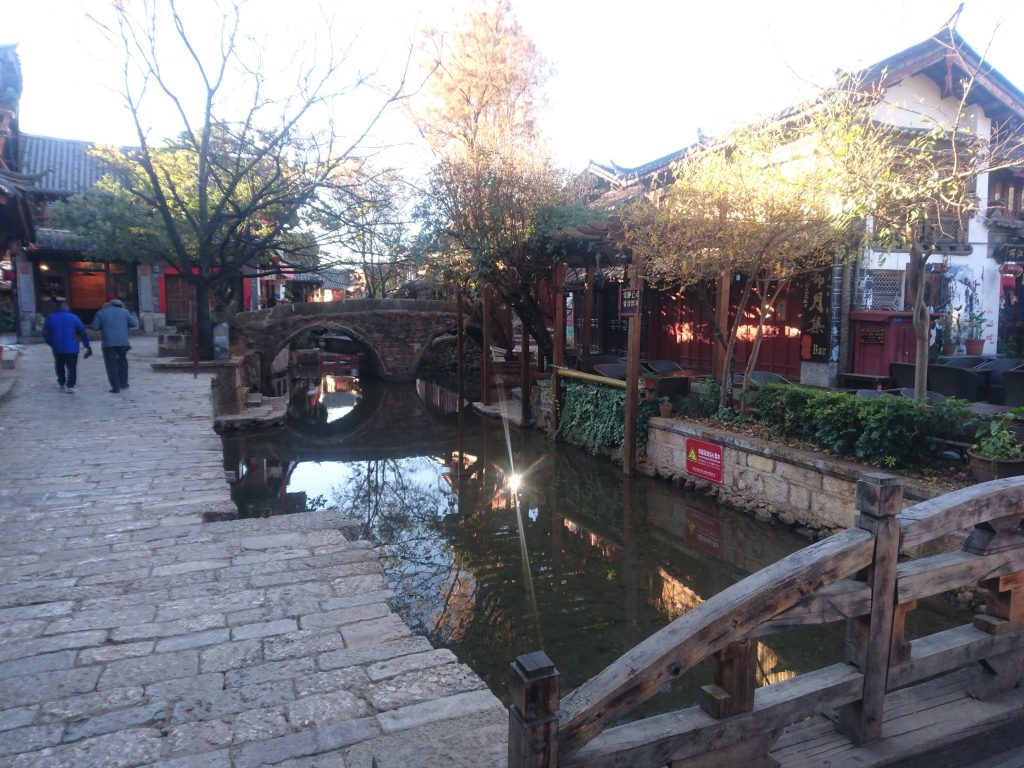 Of course it wouldn’t be China if it hadn’t been highly commercialised and adapted to the chinese way of tourism. So every single house contains either a restaurant or some shop. There is not a big variety in those shops, they either sell tea, jewellry, some kind of wood carving, or hand drums. 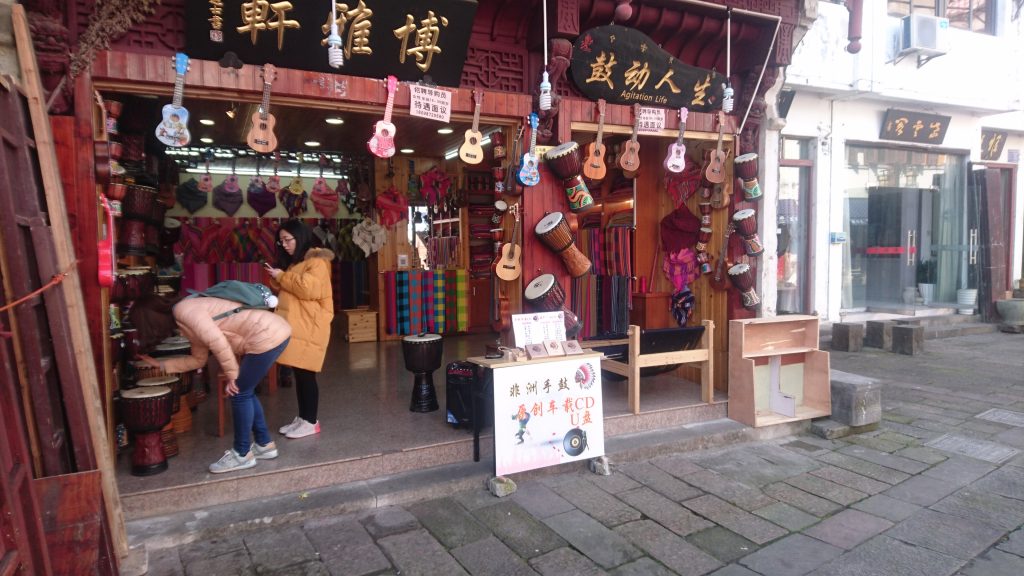 It is an exception that there are actually people inside this drum shop, that was the only time I saw a shop not empty.

The drum shops are one of the biggest mystery for me, cause there are LOTS of them, not only in Lijiang but everywhere in China. This tells me that hand drums should be highly popular here, but actually I have never seen anyone with on of those drums outside the shops, and there is never anyone inside the shops either except the owner. The weirdest thing however is that all of these shops play a certain song in an endless loop. EVERY SINGLE SHOP playsit ALL THE TIME. I have this tune in my head constantly and by now I am sure I will never get rid of it.

At night the whole old town looks even nicer than during the day, but it also turns into a crazy party area. The old houses become bars with live music and clubs with big dancefloors. The mix of ancient architectures and loud partying creates a really weird atmosphere. 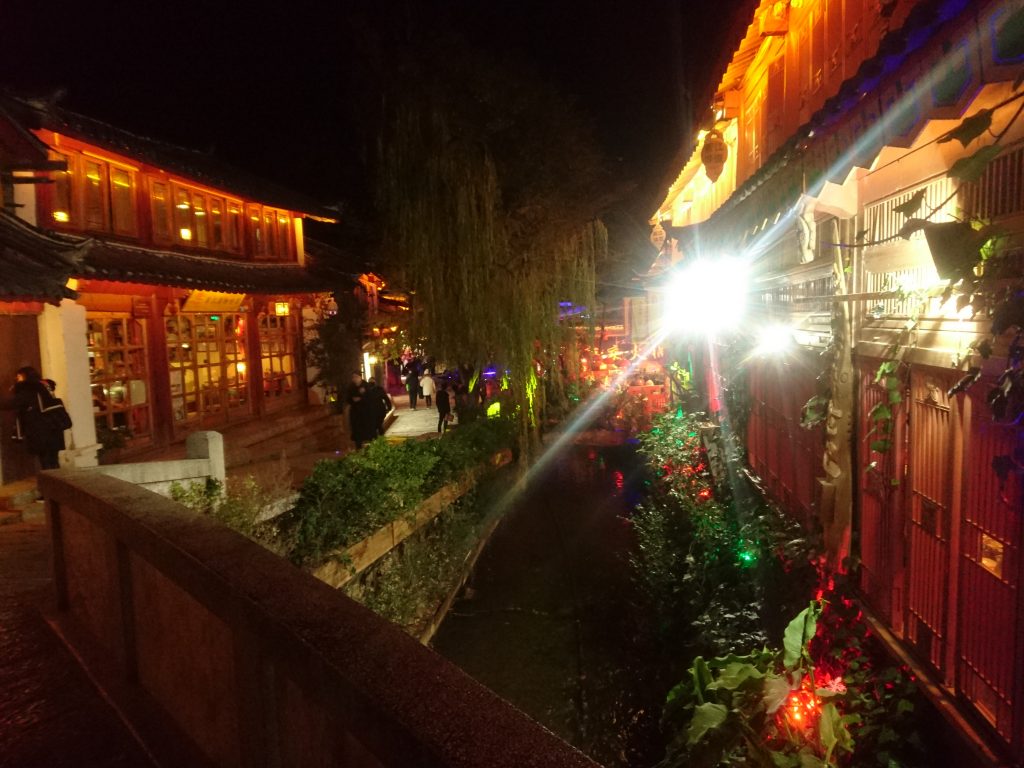 The old town at night.

Lijiang is not only a touristy place because of its old town, but also due to its environment. It is set in a nice mountainous area with a good view on the Jade Snow Mountain, which is more than 5000 meters high and one of the most iconic photo motives of China. 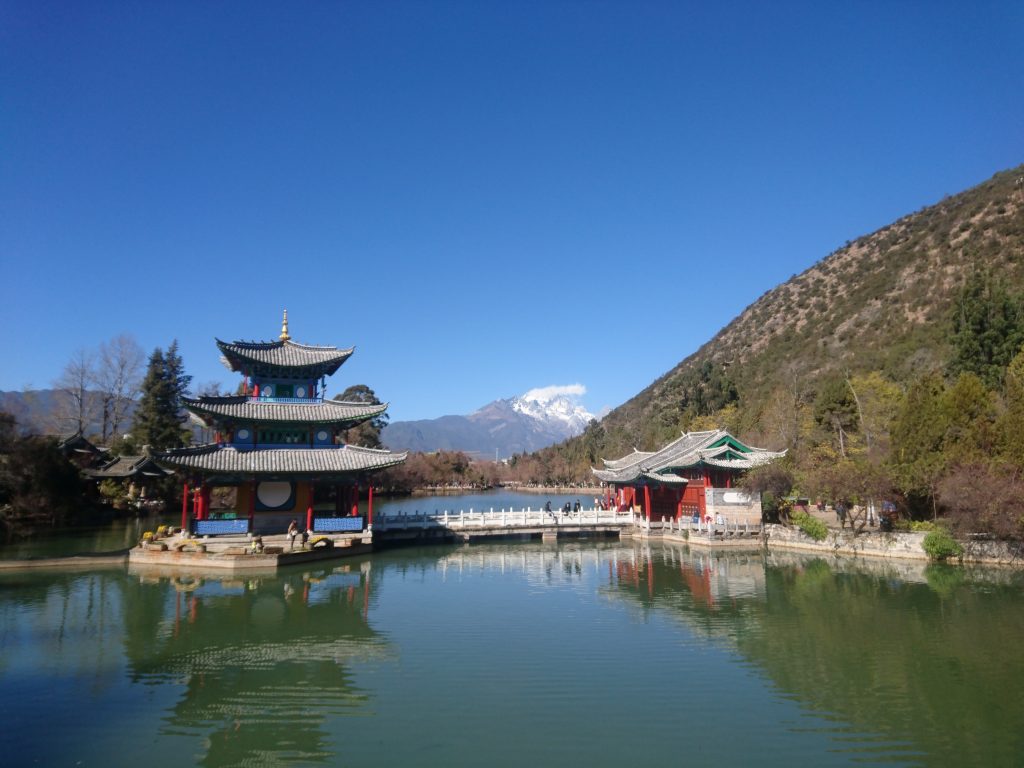 Tiger Leaping Gorge
Also very close to Lijiang is Tiger Leaping Gorge. It is a very popular hiking route through the most impressive gorge I have ever seen.
After a steep climb up to 2600 meters you hike for one to two days along the mountainside. Almost 1000 m below is the Gorge with a small river that will later become the Yangtze, and on the other side of the gorge the mountains go almost vertically up for 3000 m. 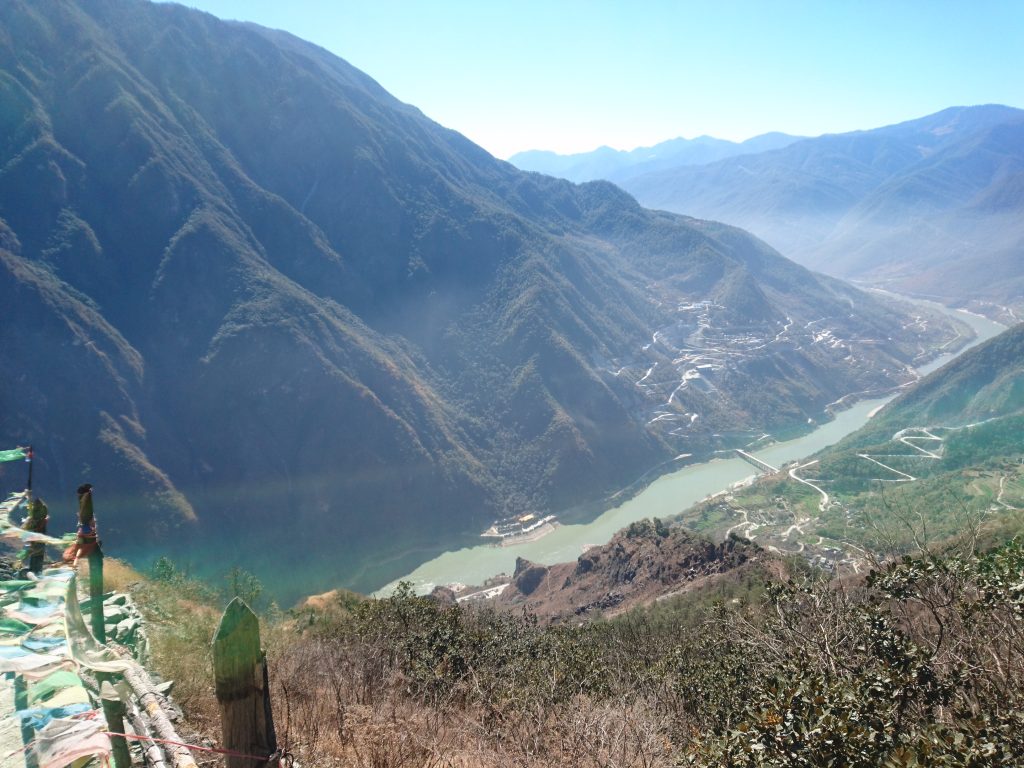 The view during the climb at the beginning of the hike 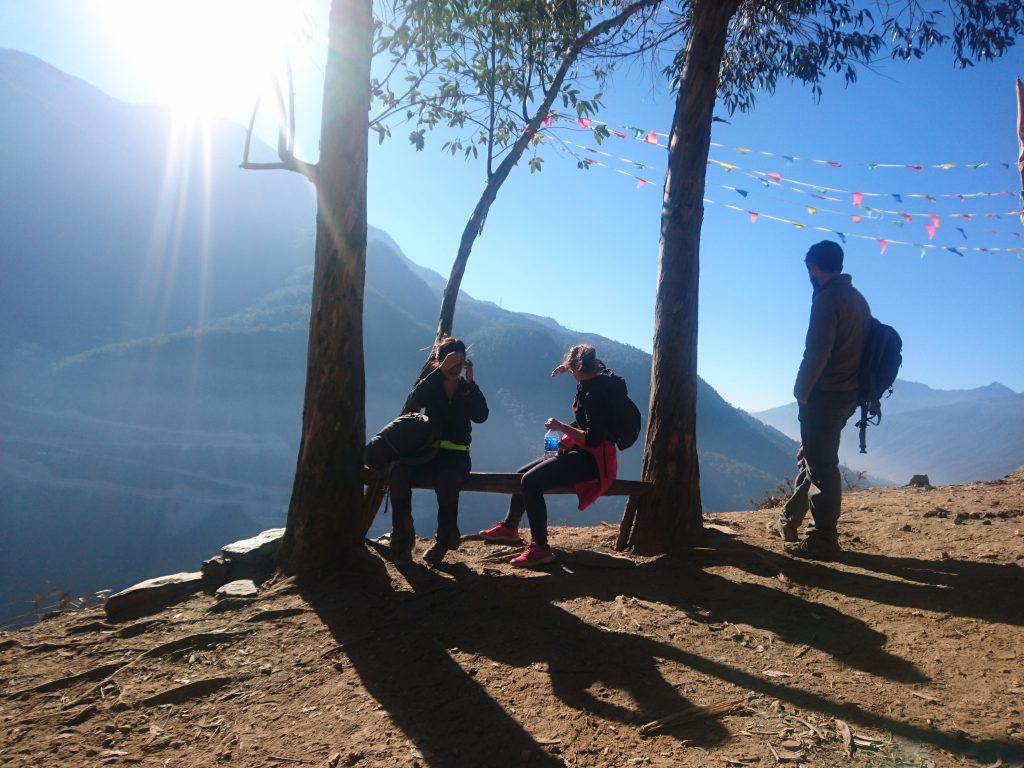 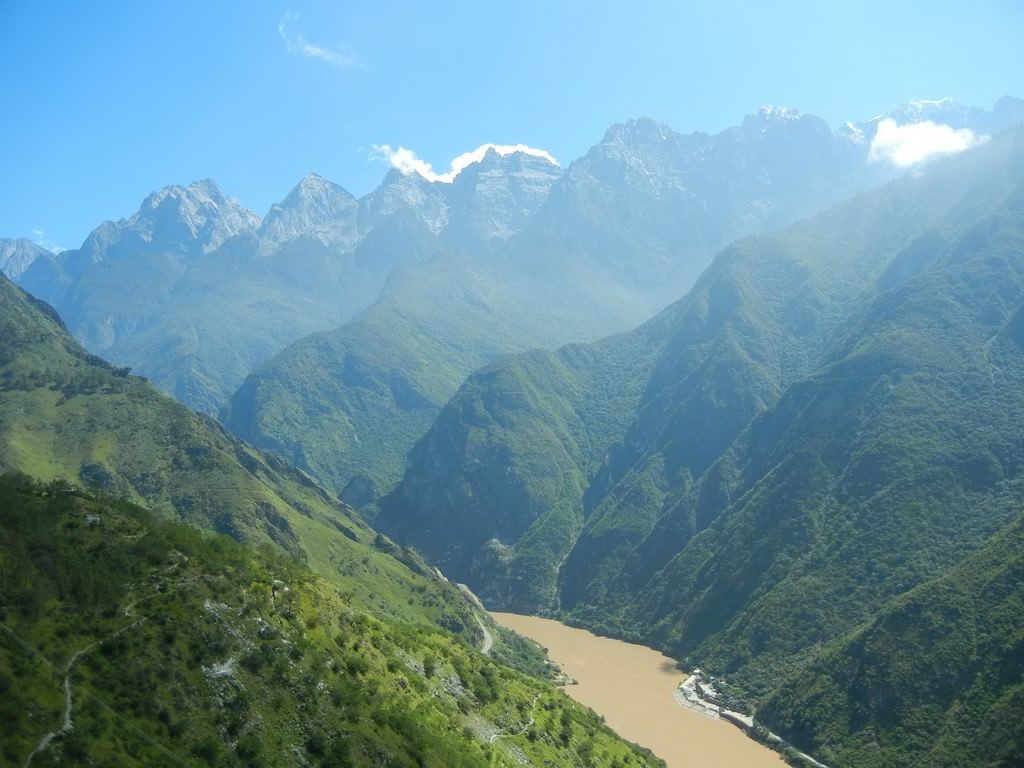 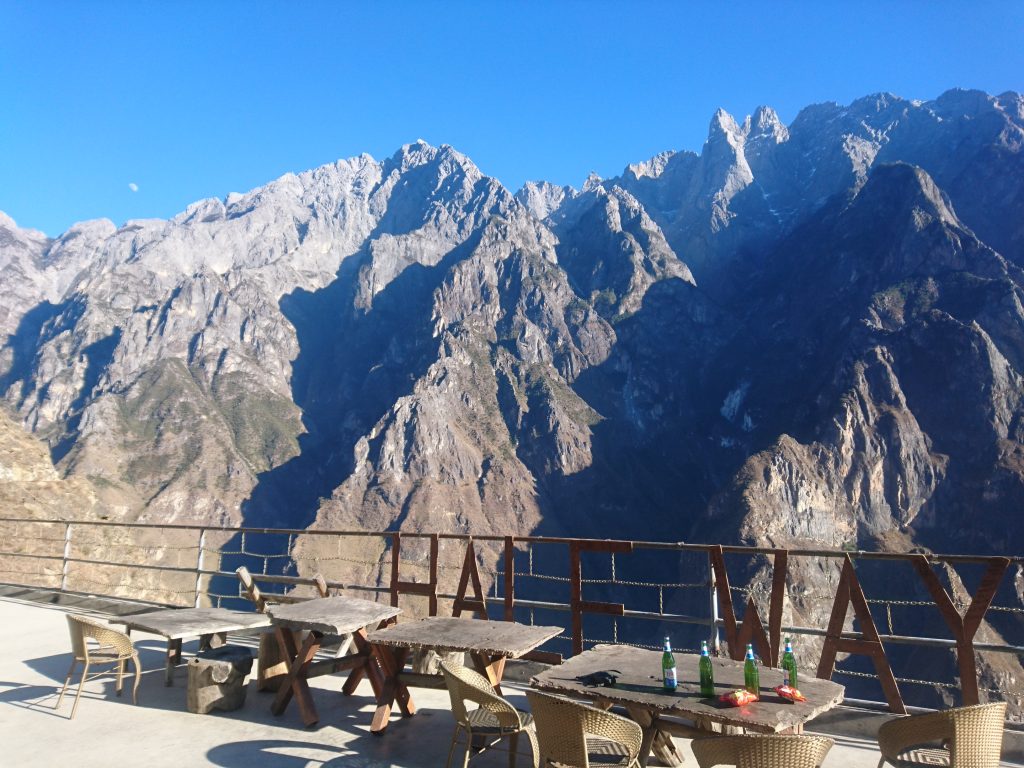 The first day finishes at the Half Way Guesthouse, with a terrace and a great view 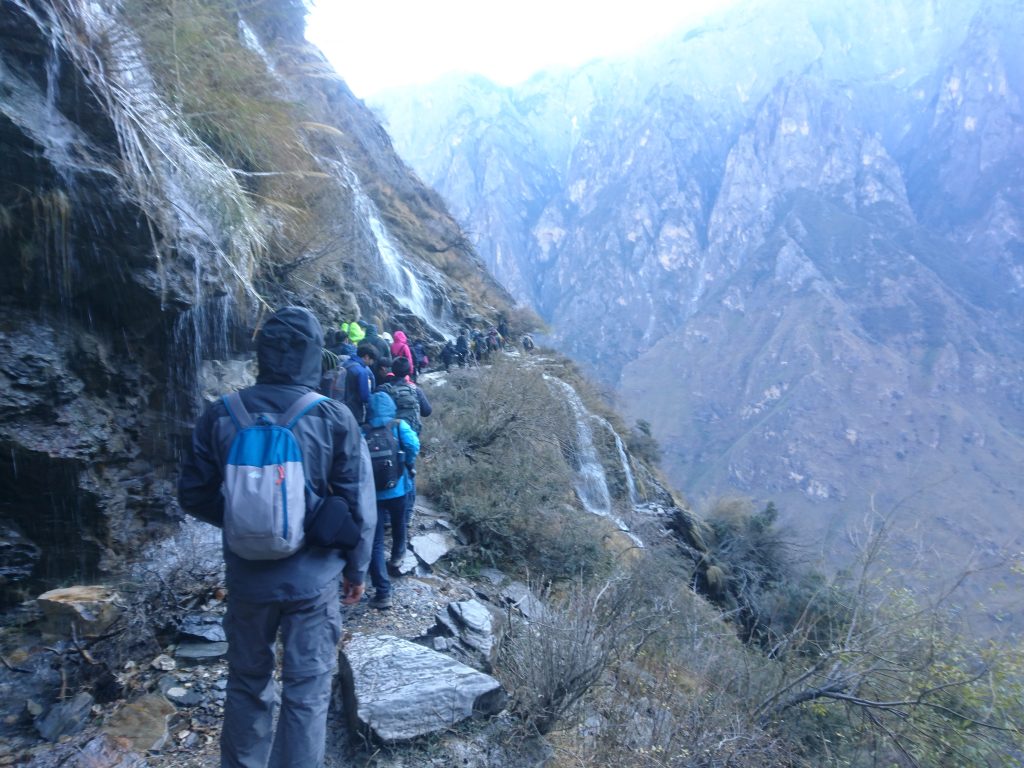 We had a group of 34 Korean school kids in our guest house, and passing them on the second day was probably the most difficult thing of the whole hike.

At the end it is possible to hike down an insanely steep trail to a point where the river is very narrow and passes through some really powerful rapids.
Down there is also the Tiger Leaping Stone that gives the gorge its name. Legend says that a long time ago, in order to escape a hunter a tiger jumped from that stone to the other side of the river (which is still 25 meters wide here). I don’t think anyone still cares about this legend, but as Chinese people a) never let go an opportunity to get themselves photographed on any object that someone says is important, and b) never let go an opportunity to make money from everything, the stone is the perfect spot for charging tourists money to simply sit on a big rock (we went to a different rock that looked almost the same but didn’t cost money). 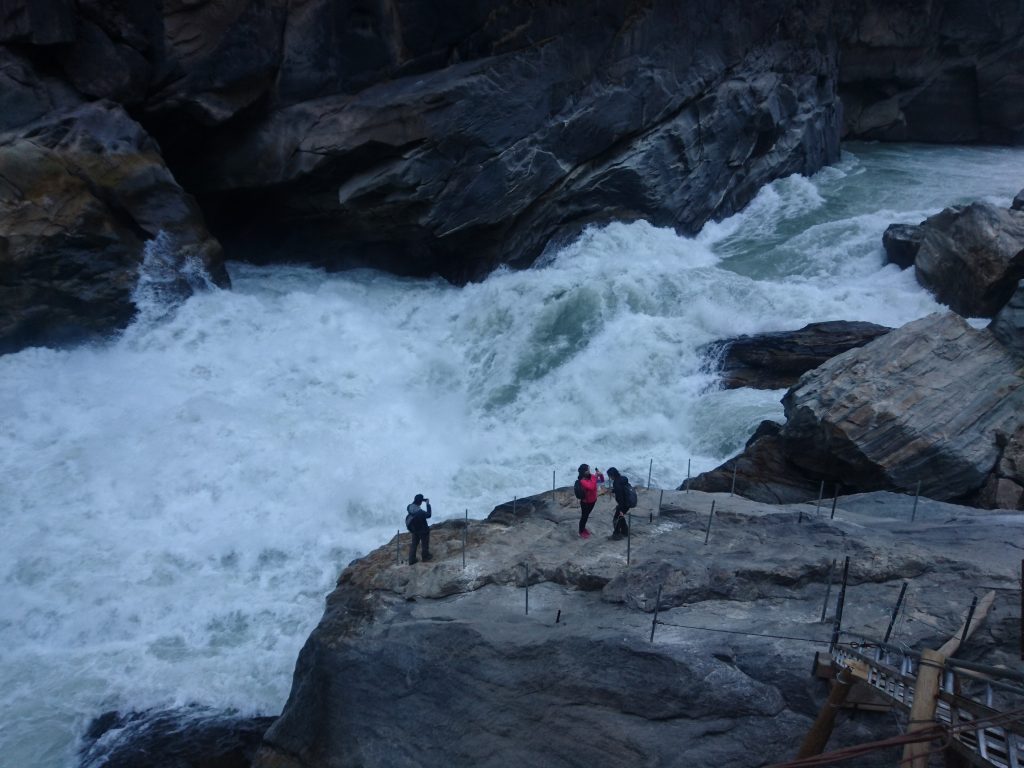 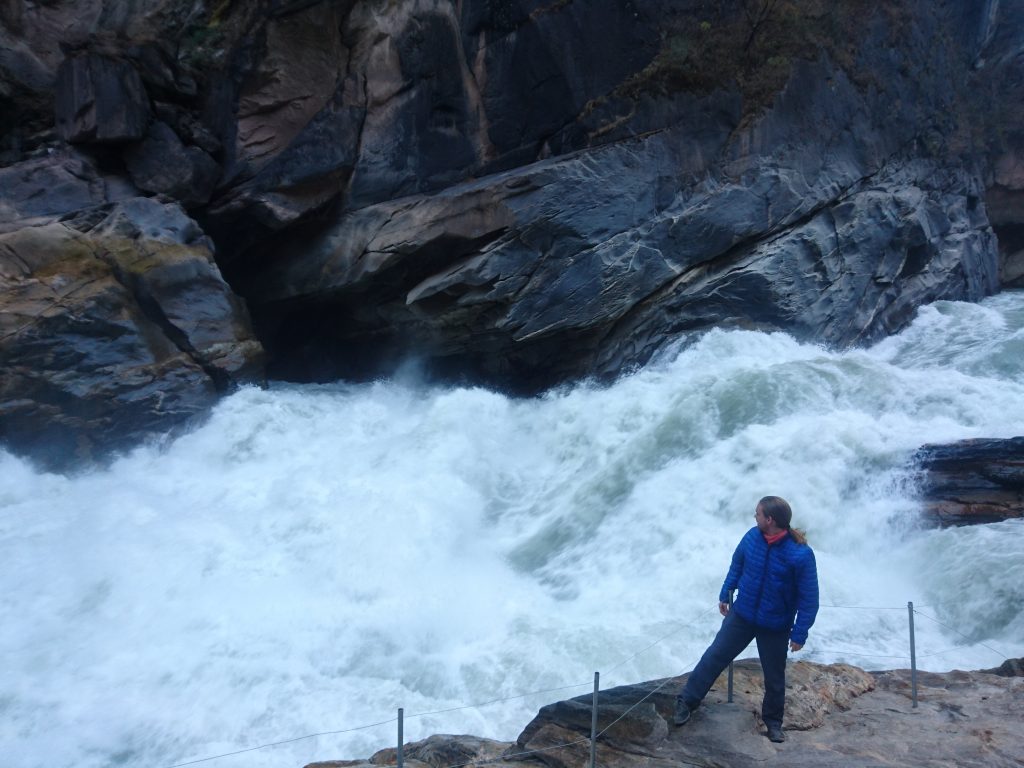 I am not sure if it is visible how powerful the rapids are, but they really are crazy. Only once a group of four rafters actually tried to raft down the river, and they just disappeared and where never seen again.

One thought on “Yunnan”