Welcome to Laos, the country where simply sitting down in a cafe and trying to order a drink may take you more than an hour. This sounds like a negative introduction, but after the hustle and bustle of Vietnam this country is actually a welcome change.

The country`s official name is Laos PDR. PDR stands for Peoples Democratic Republic (yet another socialist country, whatever exactly that means here). Inofficially it stands for Please Don`t Rush, and this pretty much nails it. Everything here seems to run at a very slow pace, everyone seems very relaxed and no one tries to bother you with something simply because you are a white tourist, as it happens a lot in the other countries down here. Also in contrast to Vietnam traffic is much less annoying and dangerous and constant honking is non-existent here.
When I arrived here, I somehow immediately adapted to that vibe, and I like it. When you want to drink a coffee, you just sit down in a restaurant. Maybe someone will come after 2 minutes and take your order. Maybe it will take 30 minutes until someone comes. Or maybe no one will come at all. Whatever. Who cares?

I am not saying the people here are lazy – they are hard working and good businesspeople for sure. But also, they are simply masters of chilling. Like this Tuk-Tuk driver, who uses his free time to sleep in a hammock, something that he and all his colleagues always have handy. 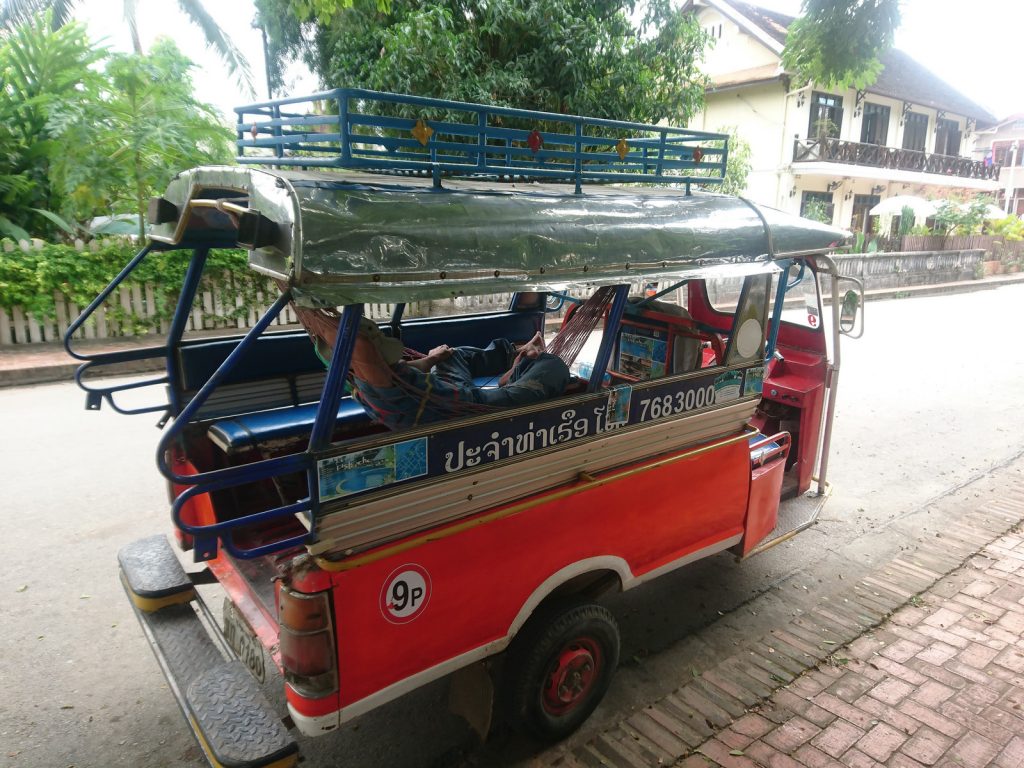 If you want to buy something here, you often have to wake the person up first. Can happen with Tuk-Tuk drivers, waiters in a bar, shopkeepers or anything else.

Not only the humans are good at it – this dog found a tree with roots that are perfectly formed to give him a very comfortable sleep. 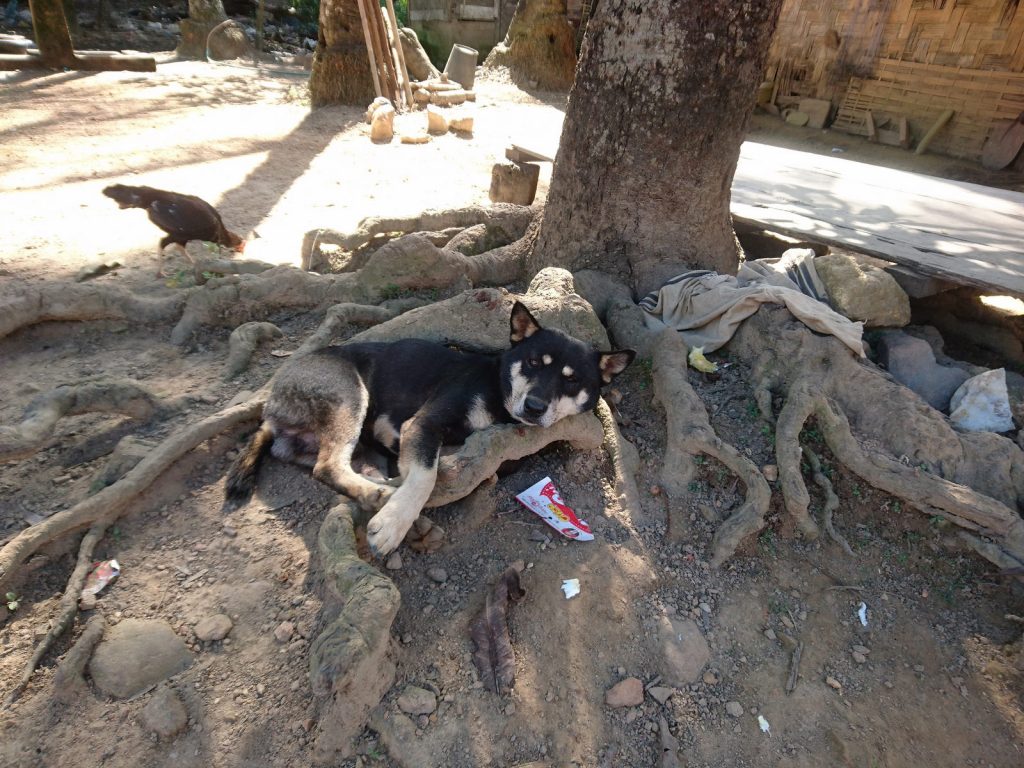 Luang Prabang
But Laos has a lot more to offer than just relaxing. The country is insanely beautiful, with rugged mountains and thick forests everywhere. In the center of northern Laos lies Luang Prabang, my first stop in the country.
Luang Prabang is located on a peninsula at the Mekong river and is a UNESCO world heritage city due to its well preserved religious and cultural heritage. That basically means that every second building in the old town is a temple or other kind of religious building. I must say that after spending 3 months in buddhist countries, I feel like I have seen enough temples, but nevertheless they really contribute to Luang Prabang’s appealing atmosphere. 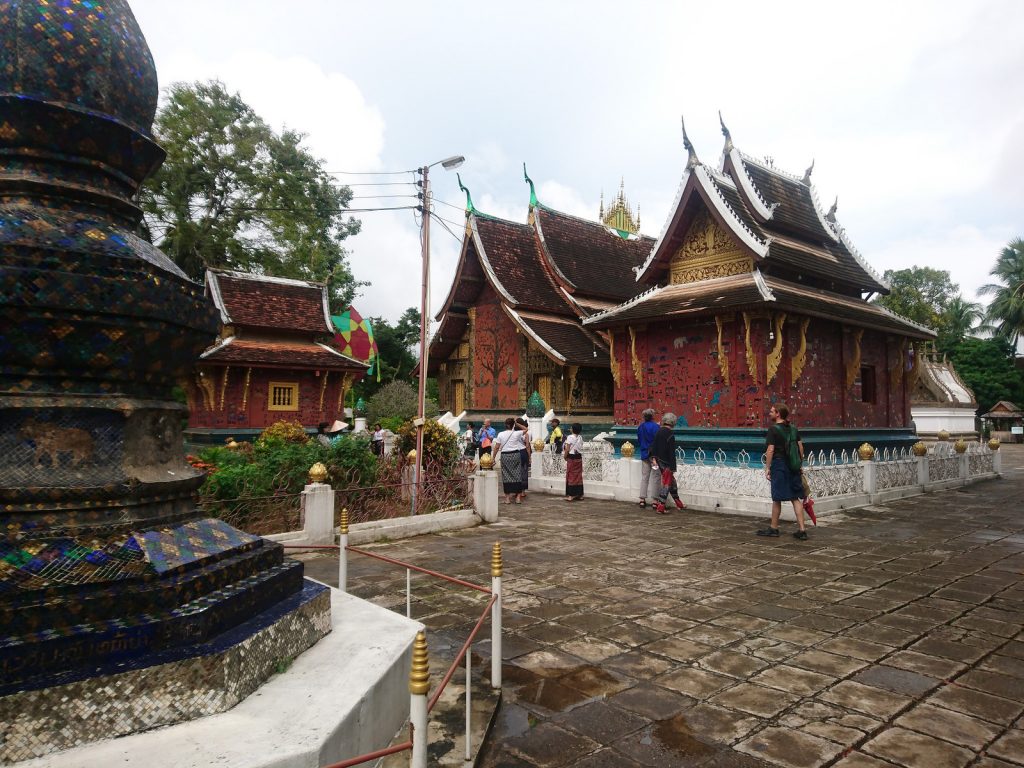 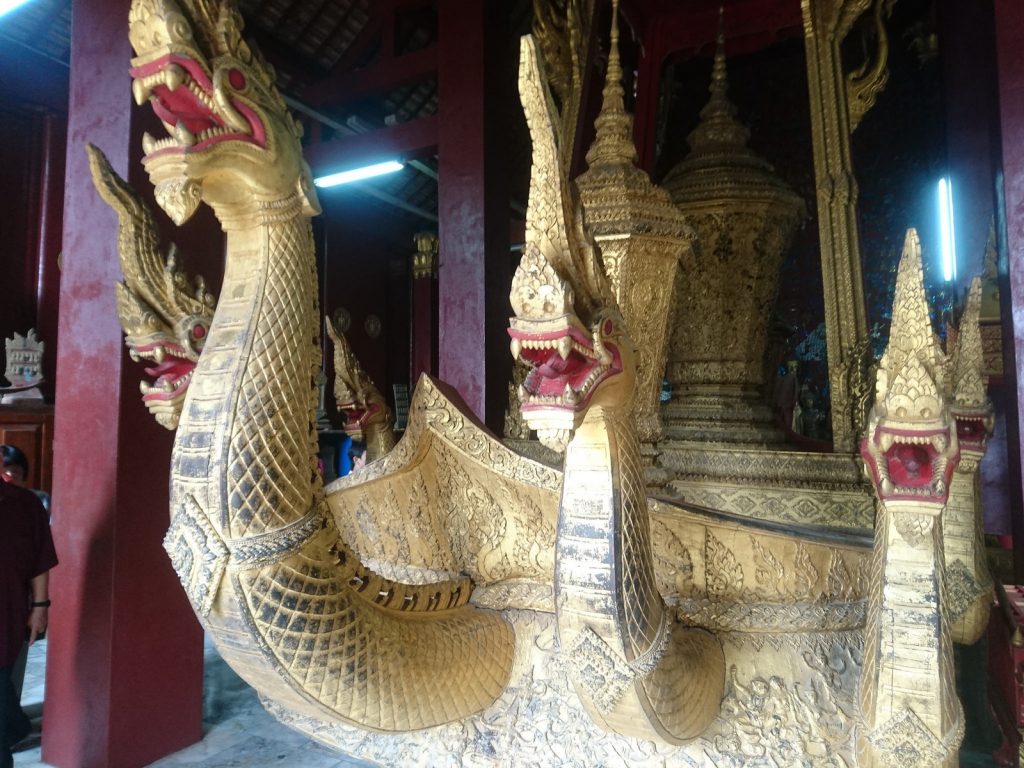 I didn’t really understand what that is, but it looked cool. It was inside a temple and looked like a golden boat with a tower on it and a couple of dragons in the front.

Kuang Si Falls
When you walk through Luang Prabang, it never takes more than a minute until you are approached by Tuk-Tuk drivers that say “Waterfall? Waterfall?”. They all mean the Kuang Si Falls, the main attraction for day tours out of LP. It is an incredibly idyllic and picturesque spot: A cascade of waterfalls, the first one 60 meters high, and after that the water flows over small limestone edges into several pools with perfectly temperated turquoise water surrounded by tropical jungle. People can bath in most of these pools, gaze at the big waterfall, and if fit enough, walk up the mountain to the top to look at the big waterfall from above and swim in some more pools. 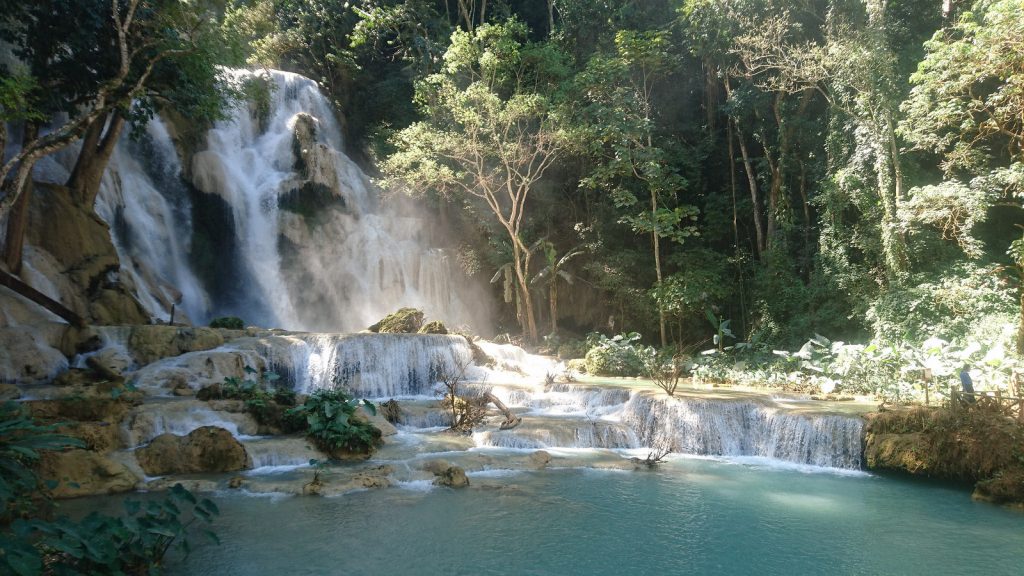 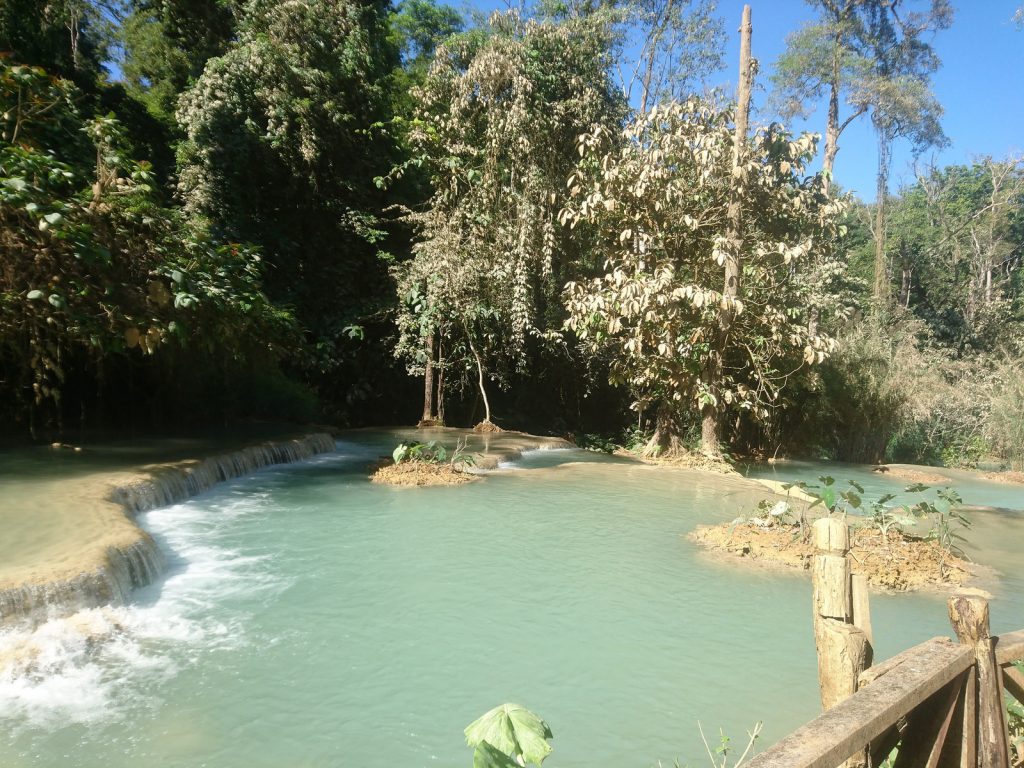 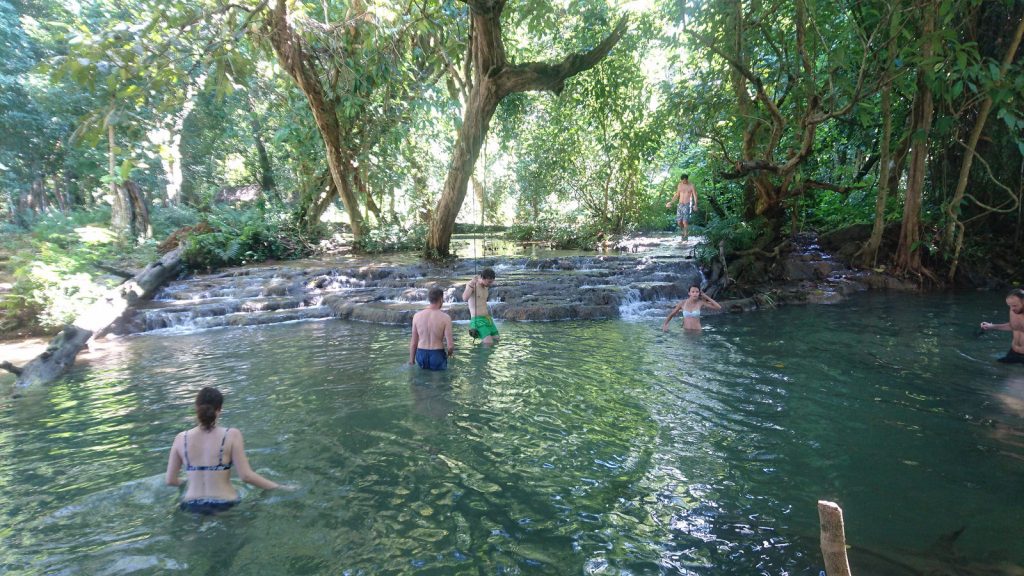 How to get mugged
Well, we didn’t really get mugged, but we still had an unpleasant experience with the local pouplation. My girlfriend, who was visiting me for 2 weeks, and me did a cycling tour a bit outside of Luang Prabang. As soon as we had left town, we were cycling along a very nice and quiet countryside road. While we were cycling up a small hill and enjoying the nice surroundings, some local teenagers overtook us on their scooters, and I noticed that one scooter got really close to my girlfriend. Before I could even notice what was going on, they had grabbed her bag, took it out of the bike basket and were driving away at full speed.
We both had our bags in the baskets in the front, and immediately we realized that this had been an ultimately stupid idea. It wasn’t a big loss, the bag itself was old and virtually worthless and contained nothing of real value. Still, it was a small shock in the beginning. But after this shock had settled, I found the more annoying thing to be that this stupid teenagers could actually do this to us because of our carelessness, rather than the things getting actually stolen. But we learned our lesson for sure, and I will never keep my things in one of those baskets again.

And finally…
The bag theft was annoying, but it couldn’t allure me from liking Luang Prabang a lot. An one more last thing happened here that makes me like the city even more… I coincidentally found a tiny chinese consulate a bit outside of the center. It is open every day, there is no one lining up in the morning (like in a certain other place) and I just went in, handed in an appication form, and a couple of days later I had a valid chinese visa in my passport. So it seems I am going to China after all!