Travelling in China can be really nice and at the same time quite annoying. China is a lot more developed than South East Asia, and there is normally no need to take endless bus rides through windy mountain roads with vomitting asian co-travellers (as in Laos for instance) cause much of China is connected by railway. However the distances are really, really huge, and even by bullet train it takes more than one day to travel through the whole country.

Train travel is also a perfect demonstration of the bureaucracy and over-organization that exists everywhere in China. Forget about spontaneously going to the station, buying a ticket and taking a train. Compared to how easy train travel is in Europe, in China it can be a nightmare procedure that easily takes several days.
It starts with buying the tickets. There is no possibility to buy tickets online. I think there is a website where locals can do it, but foreigners cannot use this site (a pattern that is very common here). So normally I have to go to the train station to buy the tickets. However, usually all trains sell out several days in advance – after all, China has more than a billion people, and train travel is very popular. So I have to decide which train to take some days before I travel, go to the train station and wait in a line for up to an hour. 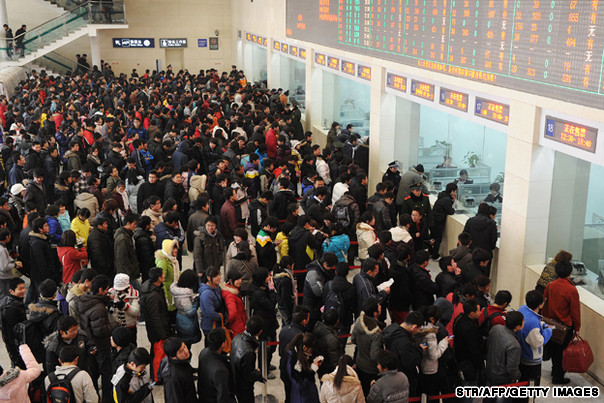 I then have to explain where and when I want to go to someone at the counter who most likely doesn’t speak any English (although in bigger cities you might find people who understand just enough to sell you a ticket). It is normally best to let someone write down the details in Chinese on a paper and give this to the person at the counter. Tickets are personalized, and it might frequently happen that the name is written wrong on the ticket. If I realize this too late, I have the chance to either go back to the counter and try to explain that my name is written wrong (which the person will probably not understand) or just use the ticket with the wrong name and risk being rejected to board the train. 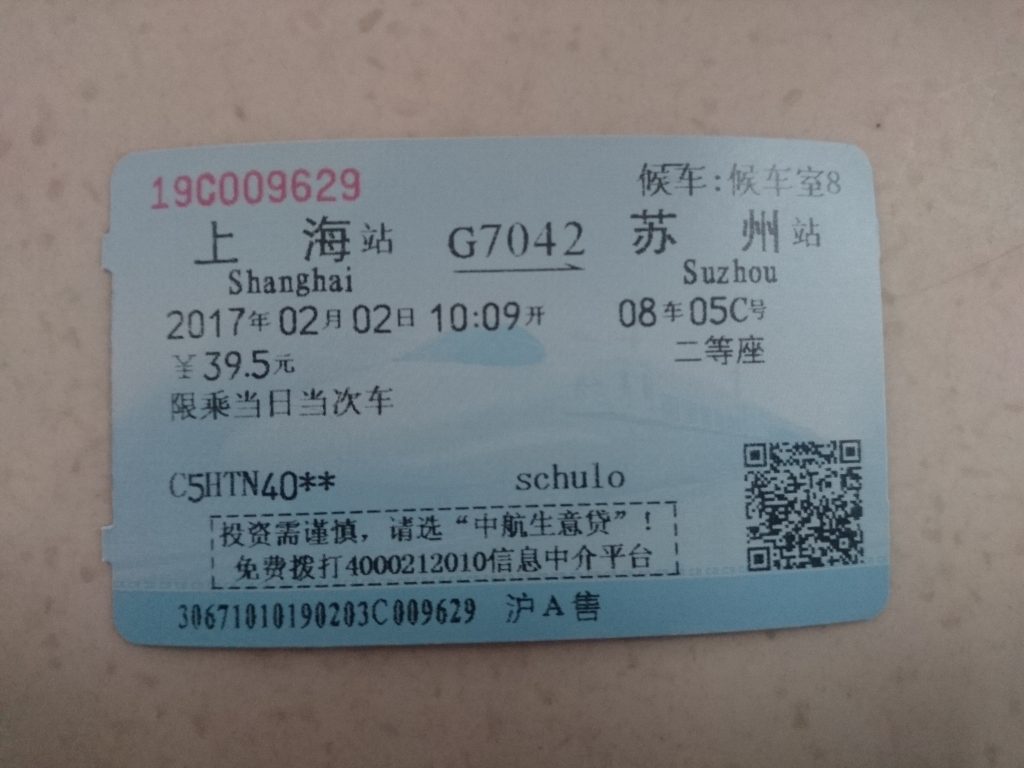 The guy at the counter wrote “Schulo” instead of “Schuld”, and didn’t even bother to write my first name. Luckily no one cared about it when I boarded the train.

There is also a website called CTrip where I can book tickets online, but this site charges pretty high fees for booking. Even when using CTrip I don’t get an electronic ticket – this simply doesn’t exist here, passengers always need to have a paper ticket. So before my train leaves, I need to go to the train station, which nowadays mostly have machines where you can get your paper ticket quickly if you have booked online… 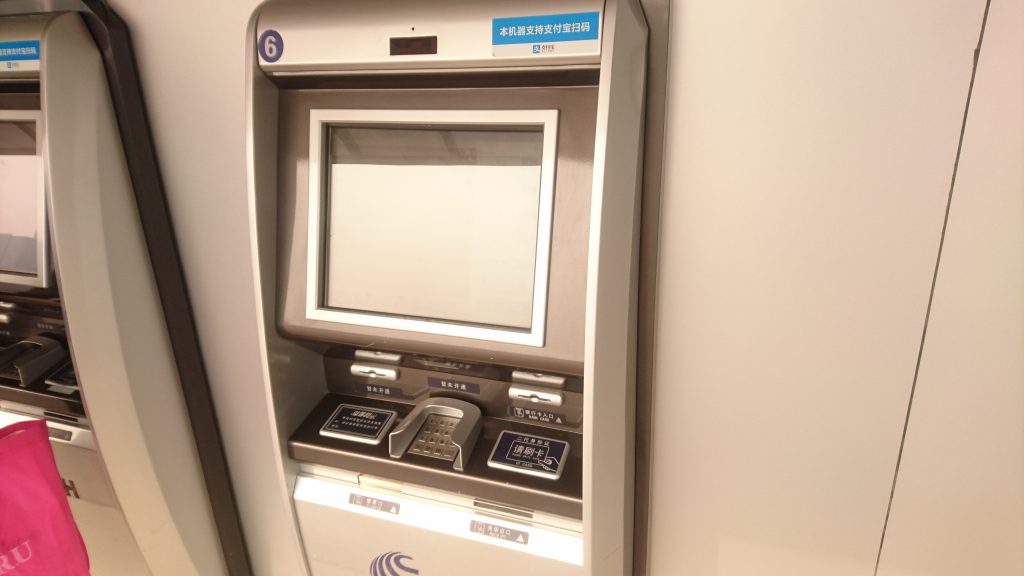 A ticket machine that has instructions in English, which is totally useless because only Chinese citizens can use it.

… if you are a Chinese citizen, cause these machines only work with a Chinese ID card. Argh. So I have to get my paper ticket at the counter, which means I have to wait in the same line as for buying the tickets.

After I finally got my ticket, I can go into the actual train station. In China, these are not like train stations in Europe, but more like airports. I can’t simply go into the station, search the platform and wait for the train. Instead I have to pass a first security check that screens the luggage and checks passport and ticket. Then I search for the platform or gate the train is leaving from. Depending on the station, this is mostly a large waiting area with seats, just like the gate of an airport. 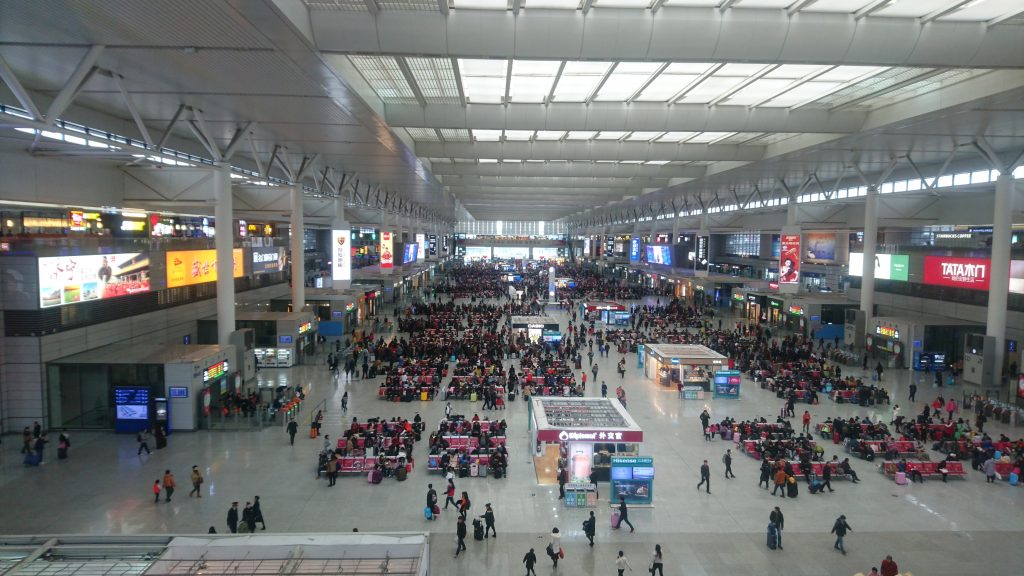 Waiting hall at Shanghai Hongqiao Station. All the small boxes on the left and right are the gates for boarding the train.

Around 15 minutes before the train arrives, the boarding procedure begins, tickets are checked again and passengers can go to the platform. Then the train crew checks the tickets again and I can finally go into the train. All in all, my ticket has been checked 3 times already before I even enter the train.
All of these steps are prone to high waiting times and long lines, so you can totally forget about arriving at the train station a few minutes before the train leaves and still catching it. You have to be there well in advance for all the procedures, just like at an airport.

The cool thing is that after all these long procedures are over and I am inside the train, everything works pretty perfect. I never had any delays, and trains are mostly very modern and comfortable. There are very modern bullet trains (some of them are the same model as a German ICE) that go up to 300 km/h, and in contrast to Europe, they actually go at that speed for almost all the time. 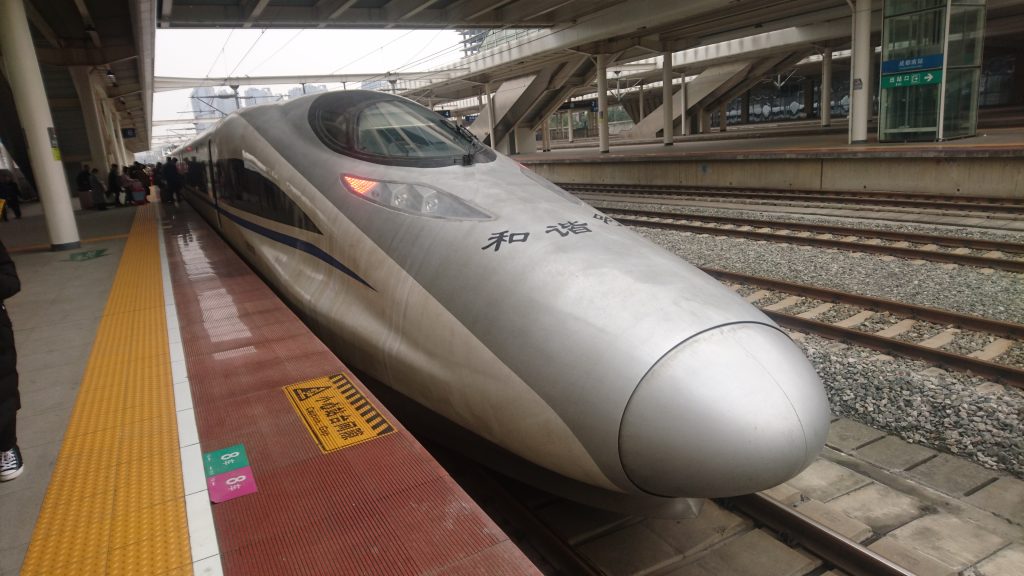 There are also slower sleeper trains that are similar to the Transsiberian. They are a good way of crossing distances that take more than one day. There is also the option to take a “Hard Seat”, which means that you sit with 3 other people on a bench. I took it once, it is very squeezed and super uncomfortable, but the cheapest option. I met people who did train rides of more than 40 hours on hard seat, which seems totally unimaginable to me. 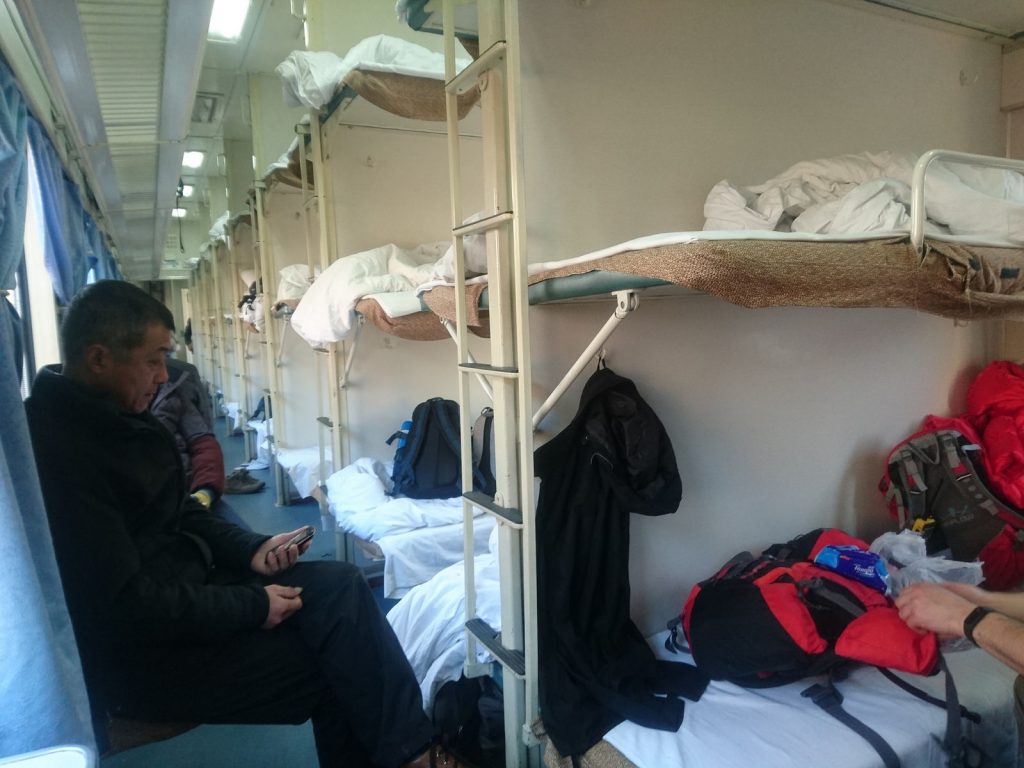 Sleeper train is pretty squeezed, but with a comfortably enough bed. Hard seat basically means that 4 people sit on one bed without a proper backrest.

The trains are always full to the last seat, and I was almost always the only foreigner. In general, this has been the norm in China – even in touristy places, 99.9% of the tourists are Chinese. It is a bit of a weird feeling to be the only white person among so many Chinese people, because I constantly stand out of the masses. And people look at you a lot, but it as always been interested and friendly, never hostile (at least I never noticed it). They still cannot talk to me due to their mostly non-existent English skills, but in trains Chinese families where often offering me food when they saw that I was not eating (or that I was eating weird stuff that they didn’t know, like bread and cheese, which they found very weird and probably disgusting). And especially children are very interested. 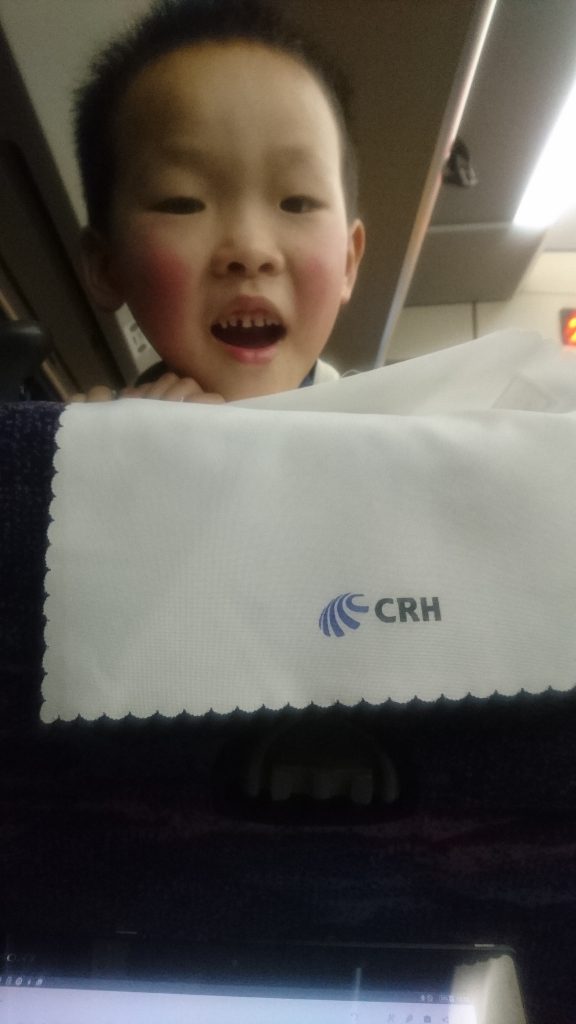 He was hiding behind the seat, coming up and looking at me and hiding again for 20 minutes

Not only in trains, but in general Chinese are very interested in foreigners and love taking pictures of themselves with them. It probably happened at least 25 times that a Chinese person came and asked if he or she can take a picture with me. First it really confused me why random strangers that can’t even communicate with me want to have a picture, but by now it happened so often that it is really routine for me. Sometimes also parents come and want to have a photo with me and their kid. 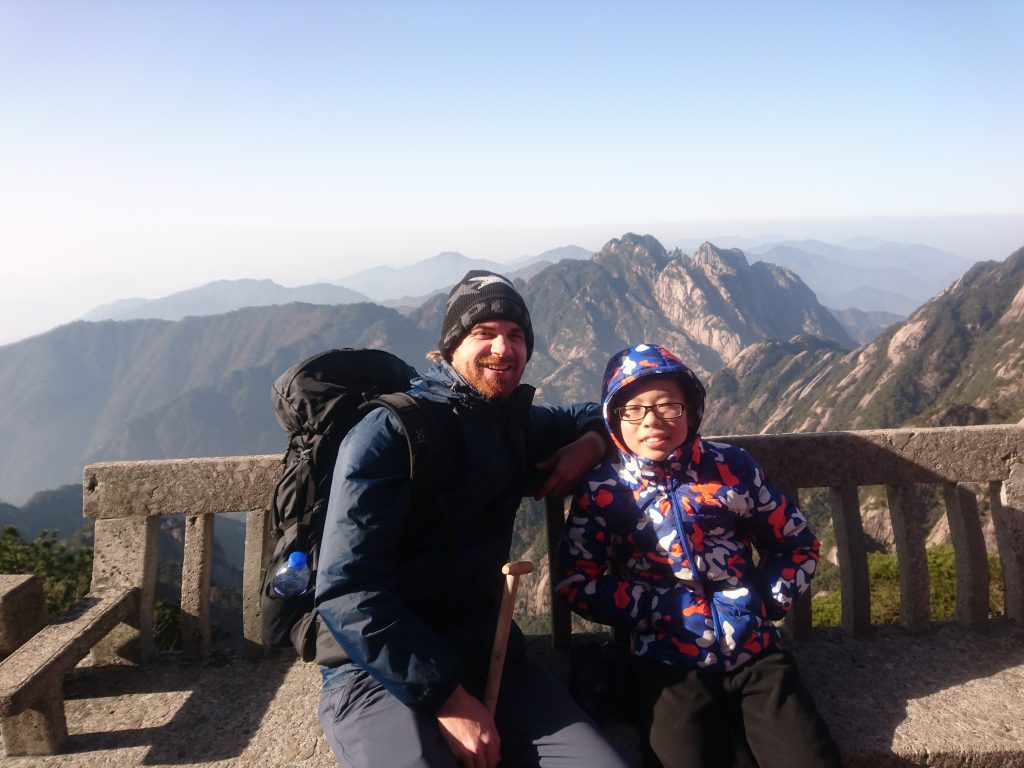 His parents forced him to come to me, say something in English (he said “Hello, photo please!”) and then took a photo