A 24 hour long flight brought me from Mongolia to Bangkok. I have written enough about the circumstances that brought me here, so I won’t repeat them; I guess it is just enough to say that arriving in South East Asia was a big cultural as well as temperature shock – The nights in Mongolia were already below freezing before I left, and in Bangkok it is still monsoon season with very high temperatures even at night. It’s not only the temperatures though, Mongolia and South East Asia seem like two opposites sides of the world in many ways: The tropical landscape of South Asia is incredibly different to the empty and sometimes barren landscape of Mongolia, the people behave in very different ways, and I don’t even want to start talking about the food – compared to Mongolia, any country you could come to afterwards seems like paradise when it comes to food. To me, the only common thing seemed to be that Mongolia as well as the South Asian countries were all buddhist, and in all countries many popular sights where some kind of buddhist temples or shrines… after a couple of months, I can clearly say now that I have seen enough temples and am not really fascinated by them that much anymore, although they are quite often nice to look at and sometimes seem like oases within otherwise busy and chaotic cities.

I had changed my plans such that I would go to Cambodia as soon as possible and spend some time there before going to Vietnam. Before going to Cambodia, I didn’t know much about the country – as a tourist destination, it is a bit overshadowed by its big neighbours Thailand and Vietnam. The one thing that I associate most with the country are the temples of Angkor Wat, which were the first stop on my way through the country.

I took a train from Bangkok to the cambodian border, and while sitting in the train, I realized that this was the first time I was in a train since over a month ago. It would also be the last time for the next couple of weeks, because there are zero passenger trains in Cambodia. Then, before reaching Angkor Wat, I had to cross the Border between Thailand and Vietnam. The border crossing I took is one of the most infamous border crossings in that area, because the whole border town is basically one gigantic scam. When you arrive, there are already loads of locals waiting for you that want to sell you fake cambodian visa (which are not accepted when you go into Cambodia) or do anything else to get some money from you before you finally leave Thailand, and literally every single person there is involved in the scams, including the police. I had done my homework and knew what awaited me, so I didn’t have any problems, but it was still crazy to see what is going on there.
It is a bit sad to see these kind of rip-offs – when I was in Bangkok, I had already encountered something similar and had gotten into the tailor scam briefly, where a Tuk-Tuk driver gives you a ride that is to cheap to be true and then delivers you too a tailor shop where people try to aggressively pressure you into buying suits. It is a bit sad if the first things that you see of these countries are so often people trying to rip you off, but on the other hand, I somehow can’t blame the people that see rich tourists coming to their countries in masses and then try anything to get at least some money from them. It is still annoying though, and I was happy when I finally arrived in Siem Reap.

Angkor Wat is a huge complex of temples close to the city of Siem Reap. The area is really, really big – I went to see the temples for two days, and in this time you can only see a small part of the area, I guess there would be enough to see to spend a whole week there.

The temples and its surroundings are really impressive – unfortunately my smartphone camera is not really able to make pictures that show how magnificent everything looks, so I just show some pictures here and hope that they give a little impression… 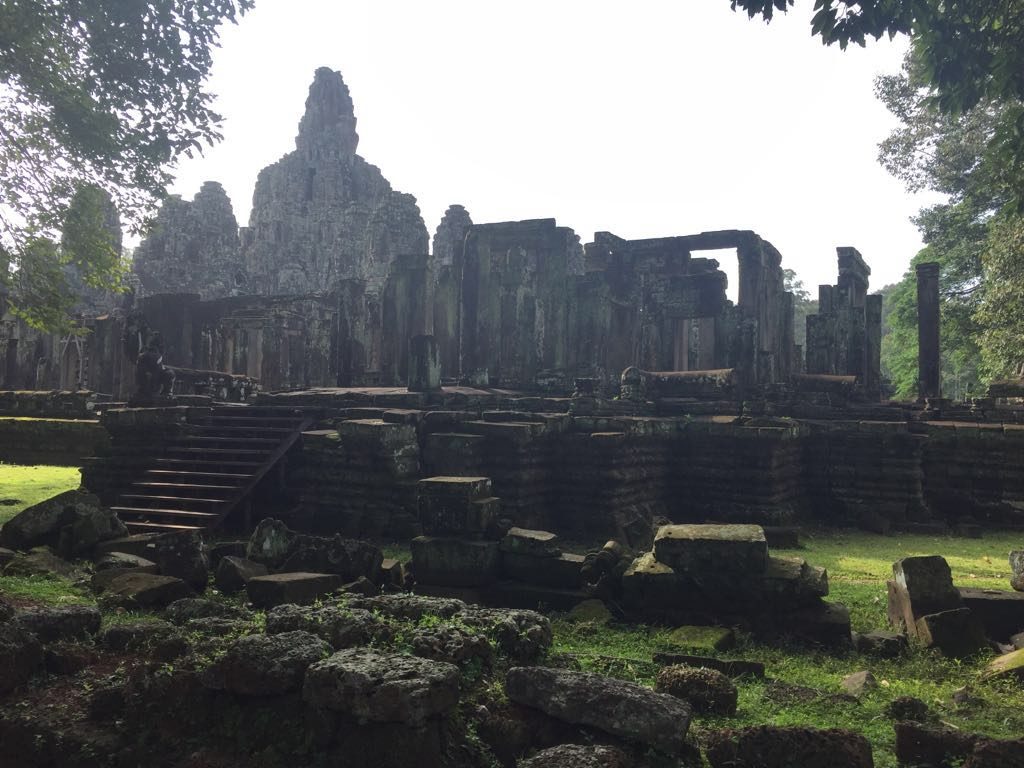 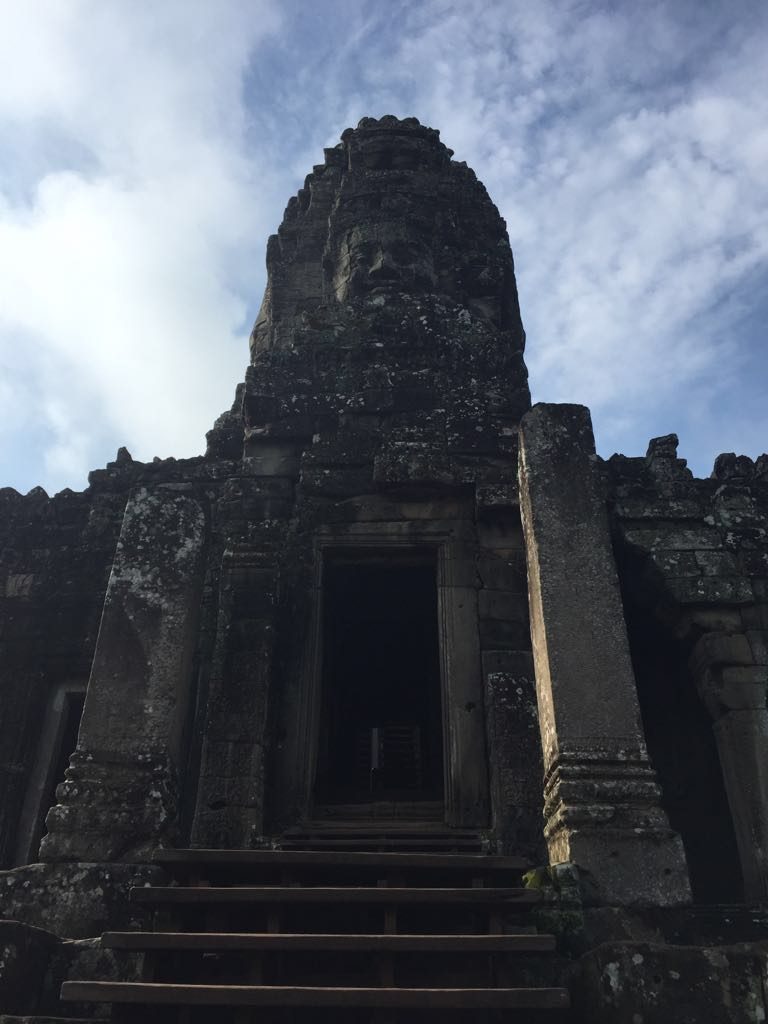 The temples were built over a period of several hundred years. They are sometimes buddhist, sometimes hindu and sometimes both, although you dont’t really see which religion a certain temple is if you don’t have a lot of knowledge or a local guide, and I had neither of those, but they are still really impressive also if you don’t really understand the whole background.

The most impressive temple is Angkor Wat itself, a huge building that is still in pretty good shape. 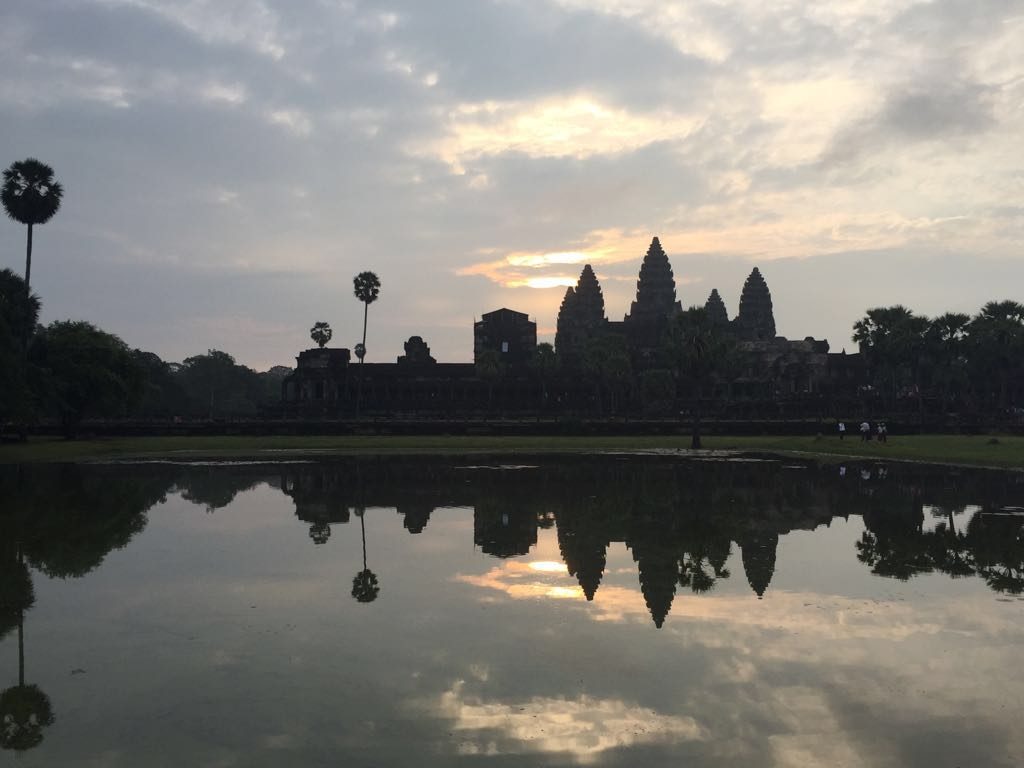 Between the temples there are gigantic artificial lakes. You wouldn’t really believe they are man made, but on a map you can see that all of them are perfectly rectangular. 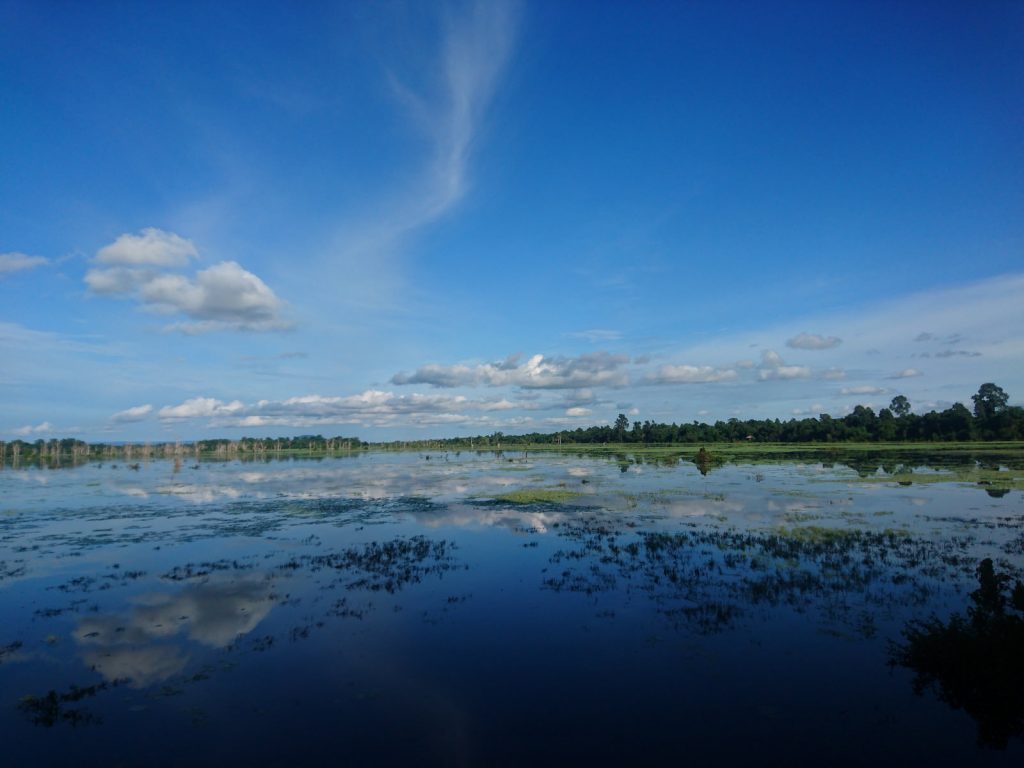 The most fascinating temple is called Ta Prohm. In contrast to Angkor Wat and most others, this temple is still more or less in the state it was when the area was discovered by Europeans – all other temples have completely been cleared of the jungle that grew over it for hundreds of years, but in Ta Prohm most of the jungle has not been cut back. There are huge trees growing inside the temple on the stones and walls. It looks like straight out of a Indiana Jones or Tomb Raider movie… which doesnt’t surprise, because scenes of Tomb Raider have actually been shot here. 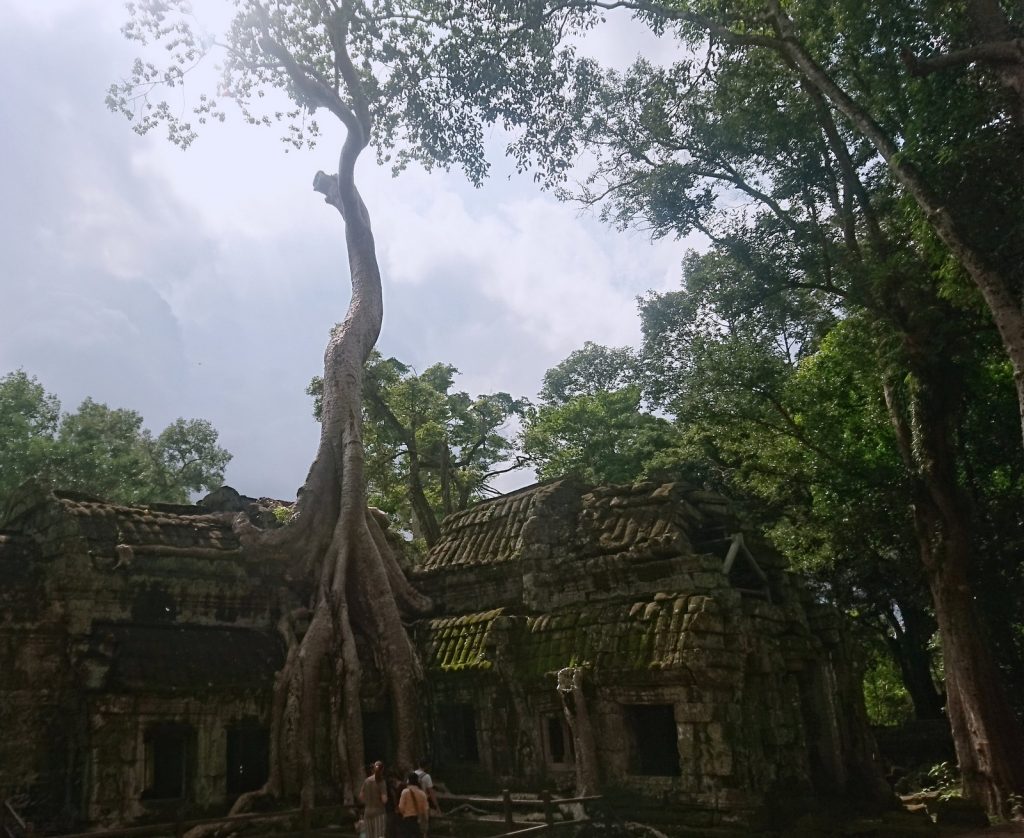 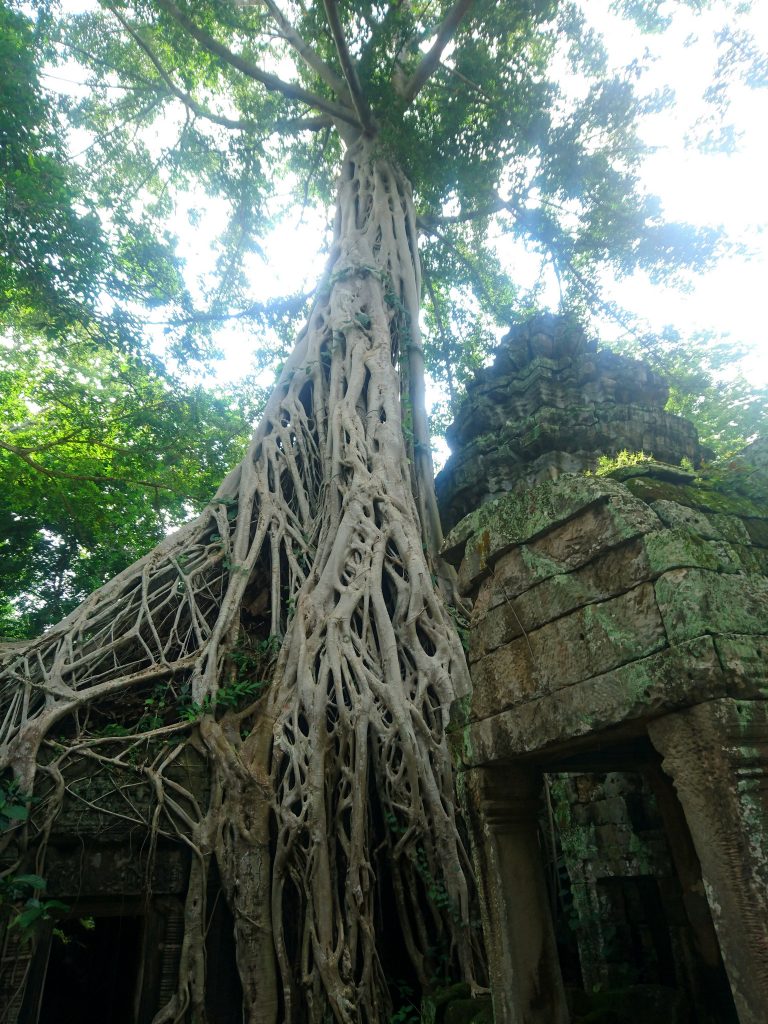 Of course, nowadays it is a huge tourist spot and attracts masses of visitors. I was there in the low season, and even then it got really packed with people – I don’t even want to imagine how it looks like in high season. 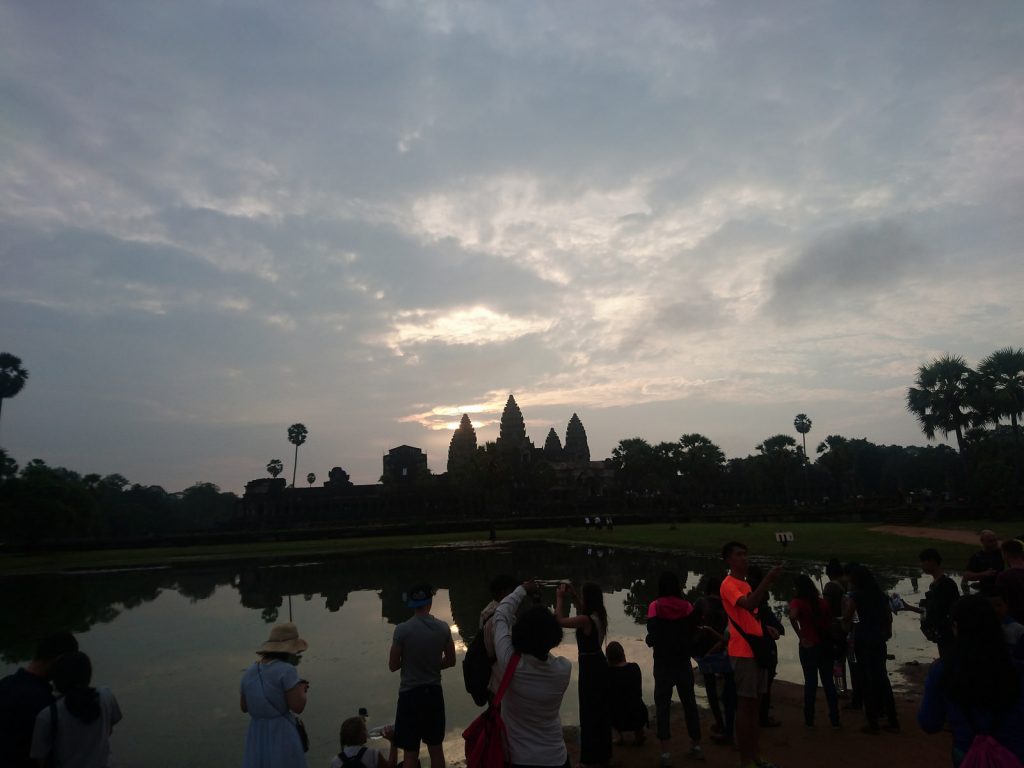