The Transsiberian Railway is certainly one of the most famous train rides in the world. And it is definitely the longest train ride one can do without changing the train.
I took the Transsiberian from Moscow to Irkutsk, which was my first stop on Lake Baikal from where I started my volunteering project for the Great Baikal Trail. This meant being in the train for more than 72 hours. After that I continued to Ulan Ude and from there towards Mongolia. The actual Transsiberian Railway is the section from Moscow in the european part of Russia all the way to Vladivostok, which is in the extreme south east of the country, situated on the Pacific Ocean and bordering North Korea and China. This route is serviced by direct trains every 2 days, and it takes 7 days and 9289 km to go all the way to Vladivostok.
Apart from that route, there is also the way from Moscow to Beijing via Ulan-Bator, capital of Mongolia. Most people choose this route and visit Russia, Mongolia and China in one trip. This trip branches off the main route of the transsiberian at Ulan-Ude near Lake Baikal and then turns into the Transmongolian Railway. The trip from Moscow to Beijing also takes 7 days. There is also a third route, called the Transmanchurian Railway. This is the least travelled route, it also goes from Moscow to Beijing, but bypasses Mongolia and rather goes from Russia directly into nothern China.

The following map shows the different railways through Siberia in blue, the three mentioned routes fork in the east: The Transmongolian from Irkutsk and the Transmanchurian from Chita: 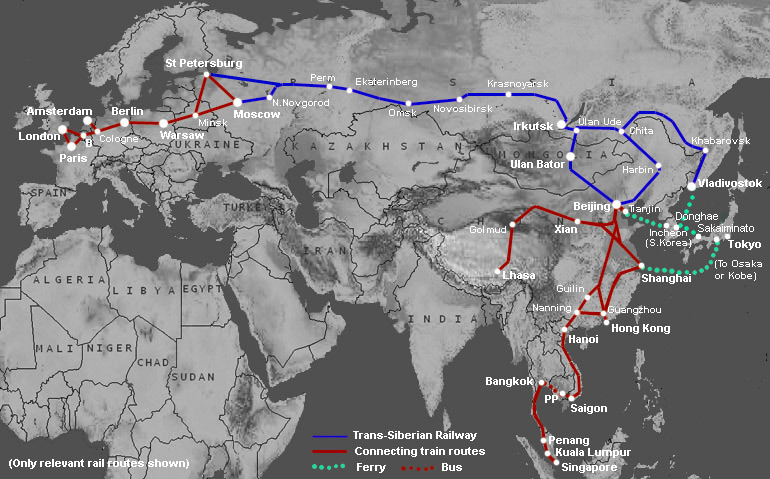 The map actually also shows different options to connect to it: It is possible to go from London to Moscow via Paris and Berlin (I started in Frankfurt and went to Berlin then). After Beijing, it is possible to go further South through China, my current plan is to go Beijing – Shanghai – Hanoi.

Booking the Train
So how exactly does it work to take the transsib? Apart from the special, super-expensive trains for tourists, the transsib is simply a normal scheduled train service running through the whole country several times per week. Booking is really as easy as going on the russian train website, booking the train you want and printing out a ticket. Many tourists still do it via some special agency, but there you will pay quite a bit more money, and in the end all they do is going on the same website, booking the train and keeping the rest of the money to themselves, so it really isn’t necessary to use such an agency in my opinion.
When booking, you also get to choose the ticket class. There are 1st, 2nd and 3rd class cars on the train. 2nd class is a compartment with 4 beds, 2 in the bottom and 2 on top. 1st class has only 2 beds, but it is kind of the same as 2nd class except that it misses the two top beds, otherwise it is not more comfortable. This is my 2nd class cabin: 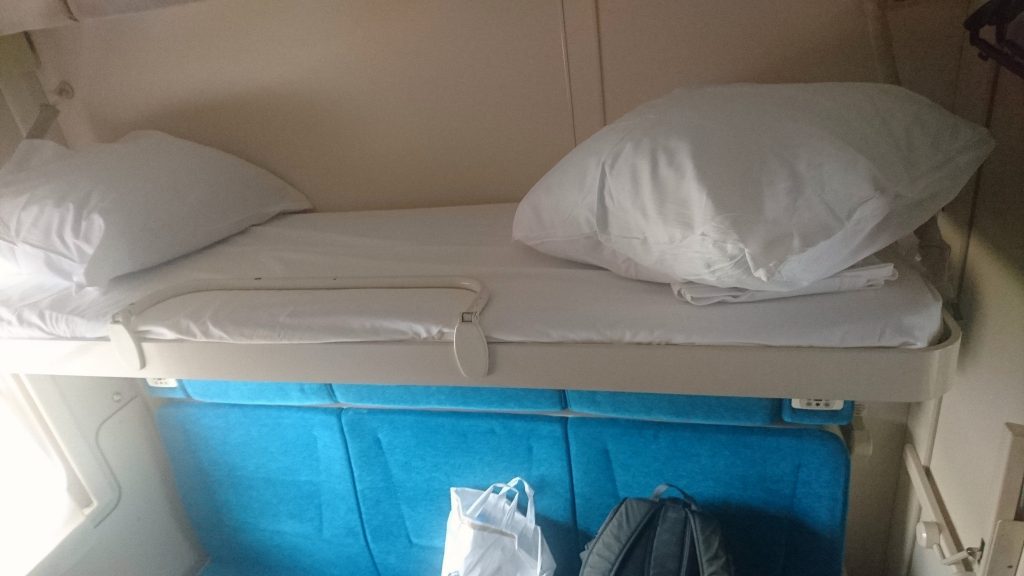 And then there is 3rd class, which doesn’t have compartments at all. It is just a car with more than 50 beds packed into it. 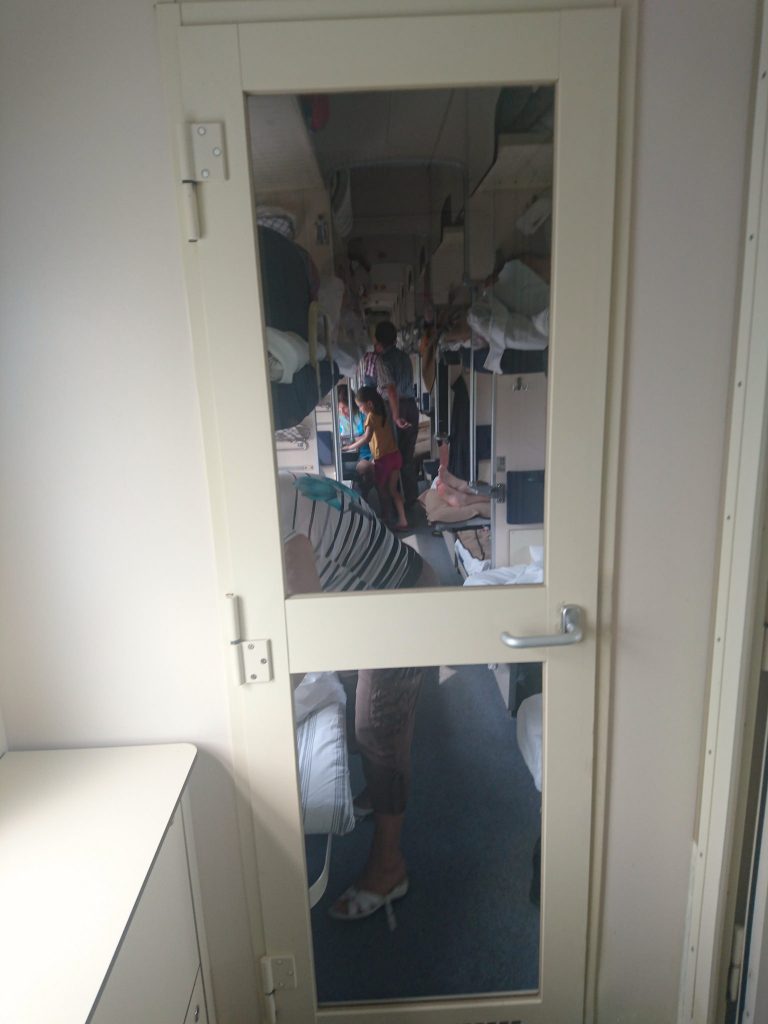 Each car has toilets, and there is a restaurant car in each train that serves food and drinks for affordable prices.

I was reading a lot about the car classes written by other tourists. Some people write it is better to choose 2nd class because it has a lot more private sphere, although you don’t know who will be the other 3 people in your cabin if you travel alone. On the other hand, some people clearly are for the 3rd class option, because it is much cheaper and you get a lot more contact with the local people there (if you want it or not). I guess, especially if you travel alone this can get quite funny and interesting if you are lucky, or quite annoying if you are unlucky.

So I thought for some time about that choice and decided to pay the 230 Euros for the 2nd class ticket from Moscow to Irkutsk (3rd class would have been around 90 Euros). Taking the 3rd class sounded interesting, but in the end I wanted to ensure that I have at least some quite time and private sphere during the 3 days.

The Train Ride
On the day of departure, I went to Yaroslavska station in Moscow and boarded the train,  after having bought some food and drinks. I knew I would not be leaving the train for a full three days, so I bought lots of stuff.
Each car has an own attendant that checks your ticket before boarding. They are quite thorough, and it seems like the attendant always knows exactly who is supposed to be in his car and where everyone has to leave. All of them speak russian exclusively, but after a few days in Russia I was used to that and always found a way to communicate with him.

I arrived in an empty cabin and waited for my cabin mates. According to the reports from other travellers, it can be anything from russian grandmas to young guys on military duty to chinese families to other european tourists. So I was quite curious how it would be… 10 minutes later, a group of 3 german-speaking people entered the flat, and it turned out that I would spend the whole way to Irkutsk with these 3 people from Hamburg. 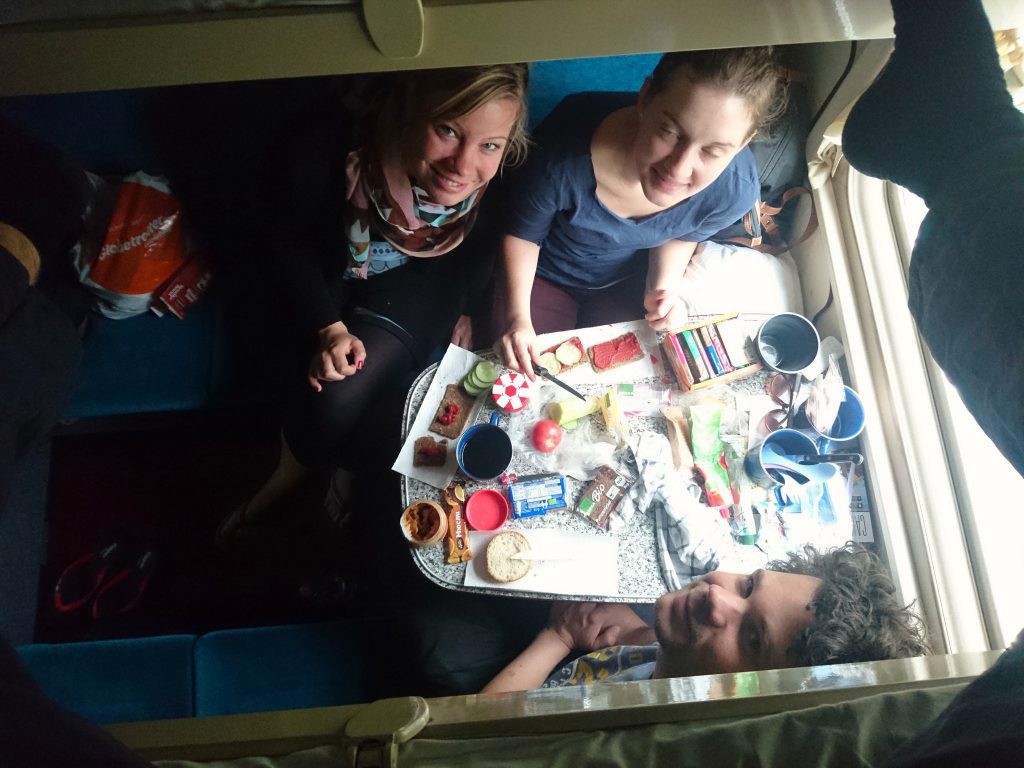 Although I try to not spend all my time abroad with other german tourists usually, our trip turned out to be great and we were bascially hanging out together for 3 days, playing cards, chatting and drinking beer in the restaurant. So I can say I was definitely pretty lucky with the people on my cabin. If I had chosen one cabin to the left, my cabin mate would have been this guy. 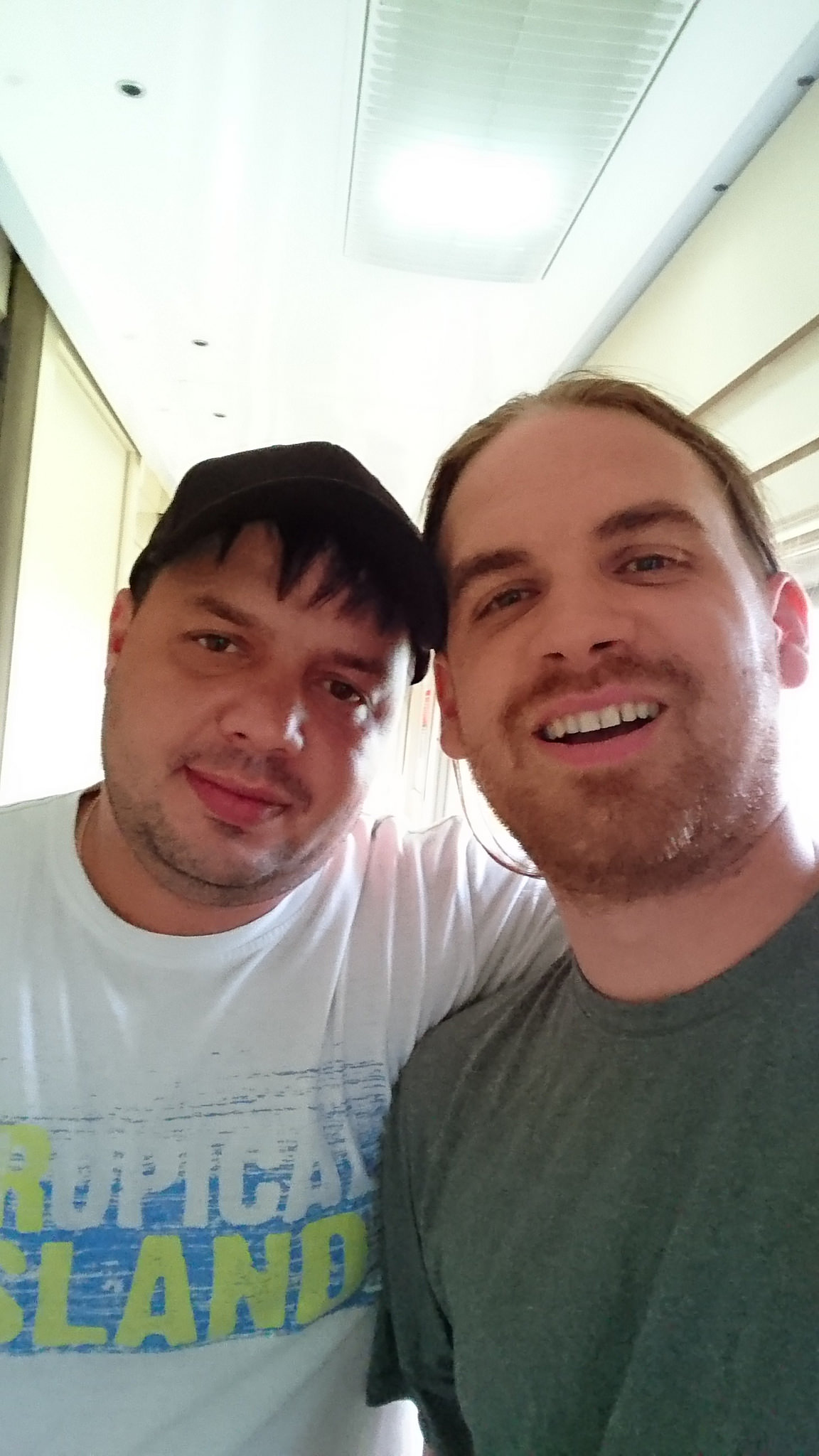 This is николай (Nikolai), taking the train from Yekaterinburg to Vladivostok. He is 30 and he likes beer. That’s literally everything I know about him. And to be honest, I wasn’t very keen on finding out more, because although he might have been a funny guy for like 30 seconds, he started to get a bit annoying after that. He couldn’t speak english at all, except “What is your name” and “Where are you from”, but that didn’t prevent him from talking to us. Of course this is nothing bad in general and I don’t have any problem with meeting the locals. But especially when he had started drinking beer (and he and his friends started early), he would unitvitedly enter our cabin (or sit down next to me while I was in the restaurant car, trying to type this article) and talking to us in russian, not caring about if we understood him or wanted to hang around with him at all. I am sure he and his friends weren’t bad guys though, and after some time we learned how to deal with them in a friendly way. On the last day I actually joined them in their cabin because they wouldn’t have let me leave the train without tasting their “own beer, fresh from factory” (It didn’t taste very well). So I sat there and could barely talk to them but it was quite funny in the end. I still have the image in my head of a half-naked fat russian guy sitting opposite to me, biting off the head of a dried fish with a drunk smile. I really should have made a photo of this situation, but unfortunately I didn’t dare to. Later I was told that it is actually forbidden to drink alcohol outside the restaurant car. The attendant didn’t really stop them though, one time he seemed to complain about something, but I was not sure if it was about the beer or the extremely smelly fish they constantly ate, which caused the whole car to smell really fishy when they opened the cabin door. The fish is apparently a true delicacy from St. Petersburg. I rejected politely when they offered me some of it.

Another guy from our car: He was also very interested in us, but decidedly more nice and likeable. 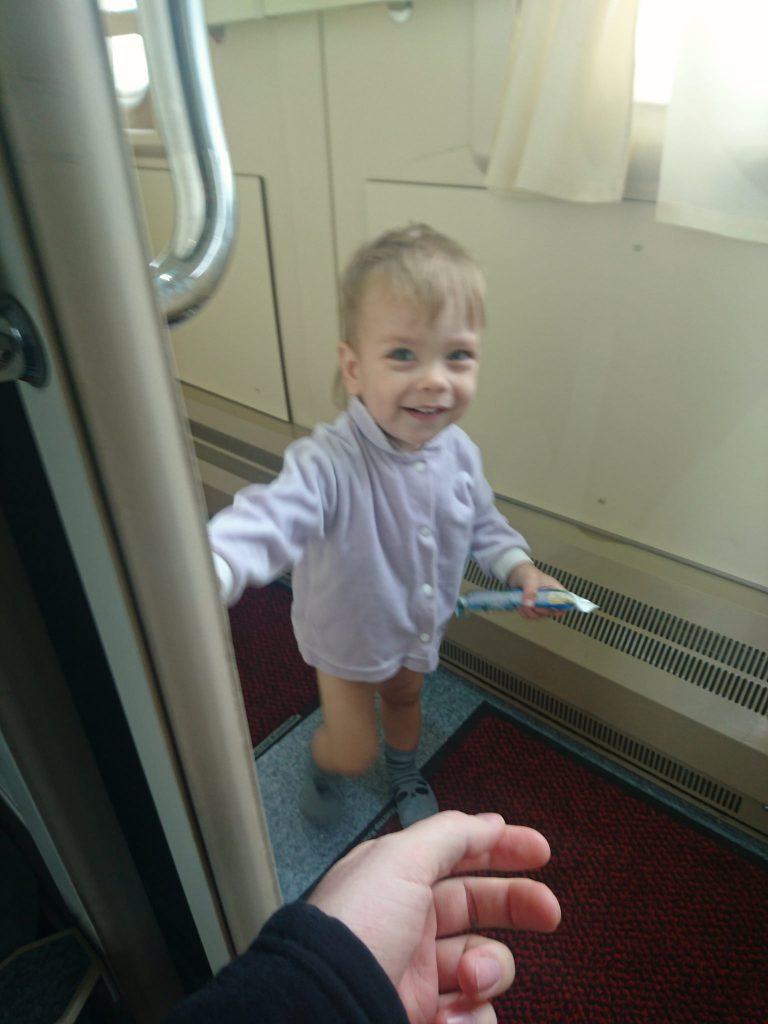 The landscape in Siberia is actually not extremely different to Europe. In the beginning, it is a lot of forest and flat land, and in between some small villages and occassionally the typical sovyet-style big city with lots of grey big residential buildings and some nice looking orthodox churches.
When coming more and more east into Siberia, the landscape changes a bit and gets less forested and more like swamps and boggy grass land.

The actual difference between a train ride on the transsiberian and one in Europe is that it is so unbelievably long. Imagine a train going at a normal speed straight to the east for days and days, over thousands of kilometers. It is simply incredible that this country is so vast, and even more incredible that when you step of the train in Irkutsk after 75 hours and more than 5000 kilometers, this is actually only half the distance through the country and there is another 3 days until the train reaches Vladivostok.
On the way the train stops every couple of hours, in bigger cities up to 30 minutes. On most stops, russian babushkas are waiting outside, and passengers can stock up on food and drinks. 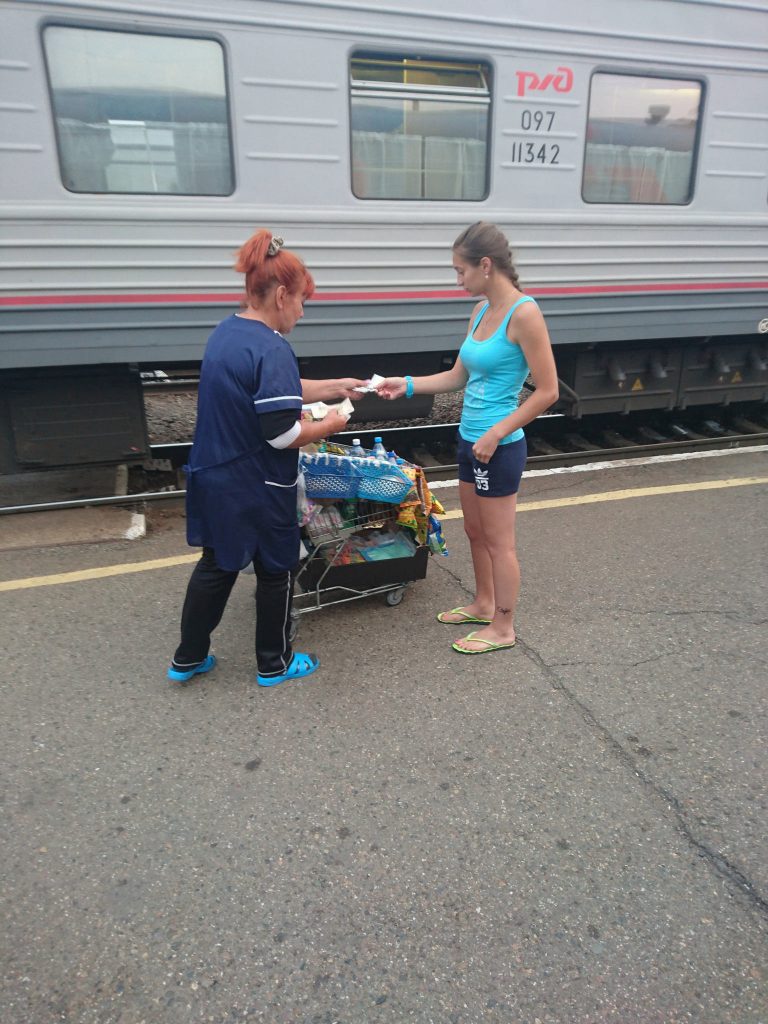 Most people do the train ride in smaller sections and stay for a night or two in some of the cities along the way Typical stops are Yekaterinburg (on the border between Europe and Asia), Novosibirsk or Krasnoyarsk. I was told that some of these cities are quite nice, but none of them seems to be super exciting, and I needed to be in Irkutsk at a specific date, so I skipped the stops and went from Moscow straight to Irkutsk.
As the way goes so far into the east, the train crosses several time zones. Alltogether, Russia consists of 11 time zones – between Kaliningrad in the west until Kamchatka in the far east. My stop Irkutsk is 5 hours ahead of Moscow. When travelling by train in Russia, the most important thing to know is that for the whole railway system, Moscow time is used. So as soon as you enter a train or a train station, the clocks will always show Moscow time and the tickets show Moscow time as well. This also means that if you stick to the time displayed in the train, you will arrive in Irkutsk at 4 in the afternoon, leave the train and realize that it already gets dark because the local time is already 9 in the evening.

3 days in the train sound really long, but somehow I got used to it really quick. In the beginning I was worried that it will be annoying to have to stay in the cabin most of the time, but in the end I adapted to this habit of sitting around, looking out of the windows, playing cards and leaving the train once or twice a day to get some fresh air and walk around at least a little bit. And I can proudly say that at least I did a walk through the whole train to have a look at the other passengers (and especially into the 3rd class, which I was very curious about) once during those 3 days – something that the people from my cabin didn’t manage to do at all. In the beginning they said they definitely wanted to do this (they actually never made it past the restaurant next to our own car), but as I mentioned, you get somehow lazy in the train very quick.

One thought on “Transsiberian Railway”