How to get out of Ulaanbaatar is the first thing you think about when arriving in the city. Not that the city would be terrible, but seeing the rest of the country is clearly what everyone comes to Mongolia for. It is possible to organize tours from outside of the country, and I met some people who did it, but normally this is not the best option because organizing something in UB normally ends up being a lot cheaper.

Touring the country can be done in two different ways: Either you book a complete tour package, or you rent only a car and a driver in UB. Booking a tour package is the most convenient way – you don’t have to care about the schedule, the equipment, the food etc, all of this is typically provided by the organizer, and extra activities like hiking or horse riding are normally also included in the price. But it is also the most expensive way to do it, and you have little influence on the schedule of the tour.
The second way is to just rent a car and decide by yourself where you want to go. Renting a car does in almost all cases also mean renting the driver. Most driving to sights in the country requires a lot of offroad-driving on dirt tracks without proper street maps, so it is simply not possible for the average tourist to self-drive a car on a tour (some people still do it though). However, most drivers are proficient at driving, but not at speaking English, so in many cases you either have to additionally hire an english-speaking guide, or take into account that you are not really able to communicate to the driver while you are on tour. When renting a car, you have to take care of all other things by yourself – where you want to go, where to sleep, how to eat etc. Depending on how luxurious you organize these things, this can turn out a lot cheaper then doing an organized tour.
Especially when you already have a bigger group available, the second option can be a lot cheaper, because the only fixed costs are the costs for the driver, and this is always the same no matter how big your group is. This means that the more people you are, the lower the cost per person is. So what most people do is to search other people to team up with and then finding a driver and a car, and that is what I did as well. A friend of mine had already been in Mongolia for two weeks, and when I arrived, we started searching other people to join us on a trip to the Gobi desert. We quickly found a guest house that arranged a driver for us, and two more people to join us, and after 4 days of hanging around in UB I could finally leave the city.

Our group consisted of Erwin and Milou from the Netherlands, Daniela from Germany, myself and our driver. Luckily we got a driver who spoke pretty good english, which was really a huge plus. Embarrassingly, I am not sure what exactly his name was – he told us three times in the beginning, and somehow we were never able to remember it correctly. It really wasn’t that difficult, but the mongolian language is so completely different to any other language I know and everything, including names, sounds so unusual, that it just seemed impossible to remember even the easiest words. So for the rest of the trip we just never adressed him directly by his name to not have to admit that we still don’t know it. I think his name was Balad or Badal or something like that.

As soon as you leave UB and have some hills between you and the city, you immediately feel like being in another world. Just a few kilometers outside of the city, you have the hill and grass landscapes typical for Mongolia, with nothing on them except the gers of the nomads and herds of animals. There are really a lot of animals and although none of them are actually wild (they all belong to Nomads), there are no fences anywhere. The animals just roam the landscape freely, and each evening the Nomads are going around and bring them back to their camp where the animals spend the night. This also means that frequently there are animals crossing the street (or just stand on it without moving). Sometimes it is just 1 or 2 cows crossing, but sometimes there are huge herds of goats and sheep. 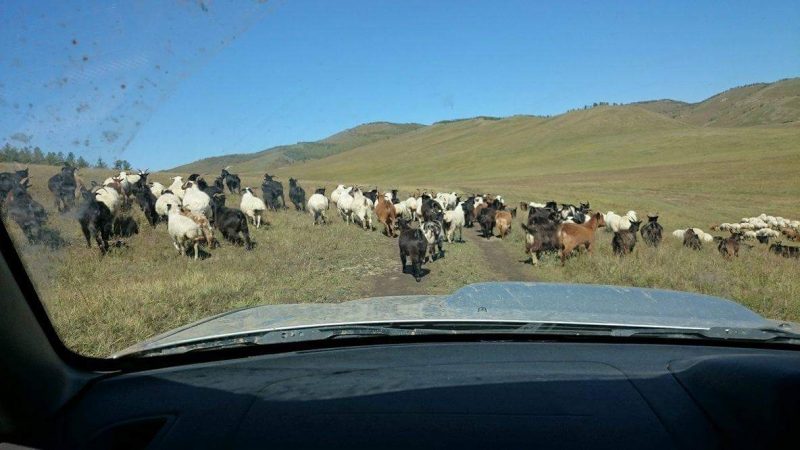 A thing that is not common anywhere else is that here you also see a lot of horses. Cows, goats and sheep are well known in Europe as well, but where do you see herds of horses just roaming around the area by themselves? This was pretty unusual in the beginning. 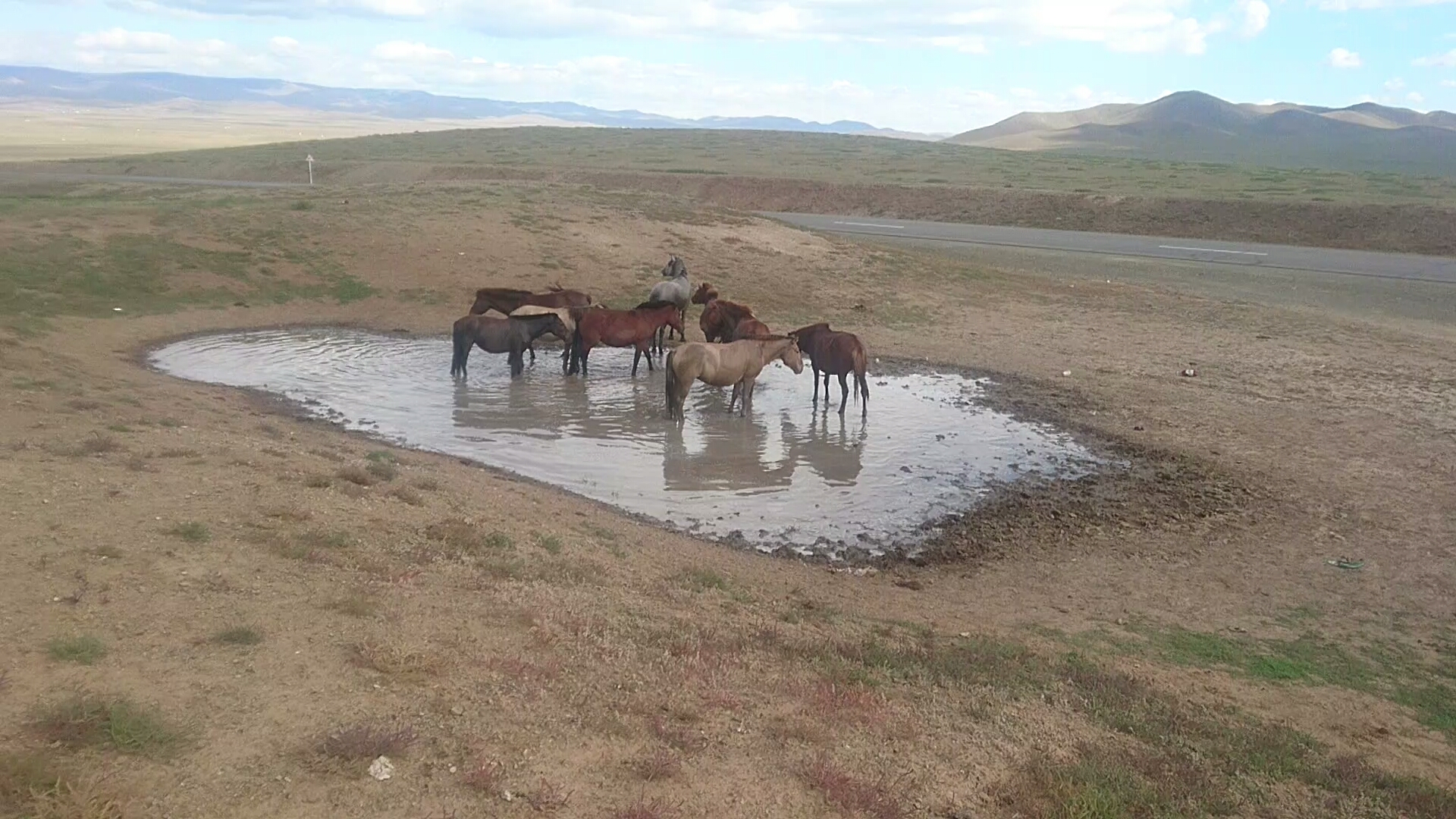 Around 100 km south of UB, the landscape started to change and became more flat and arid, and you saw less cows, but therefore occassionally some camels. 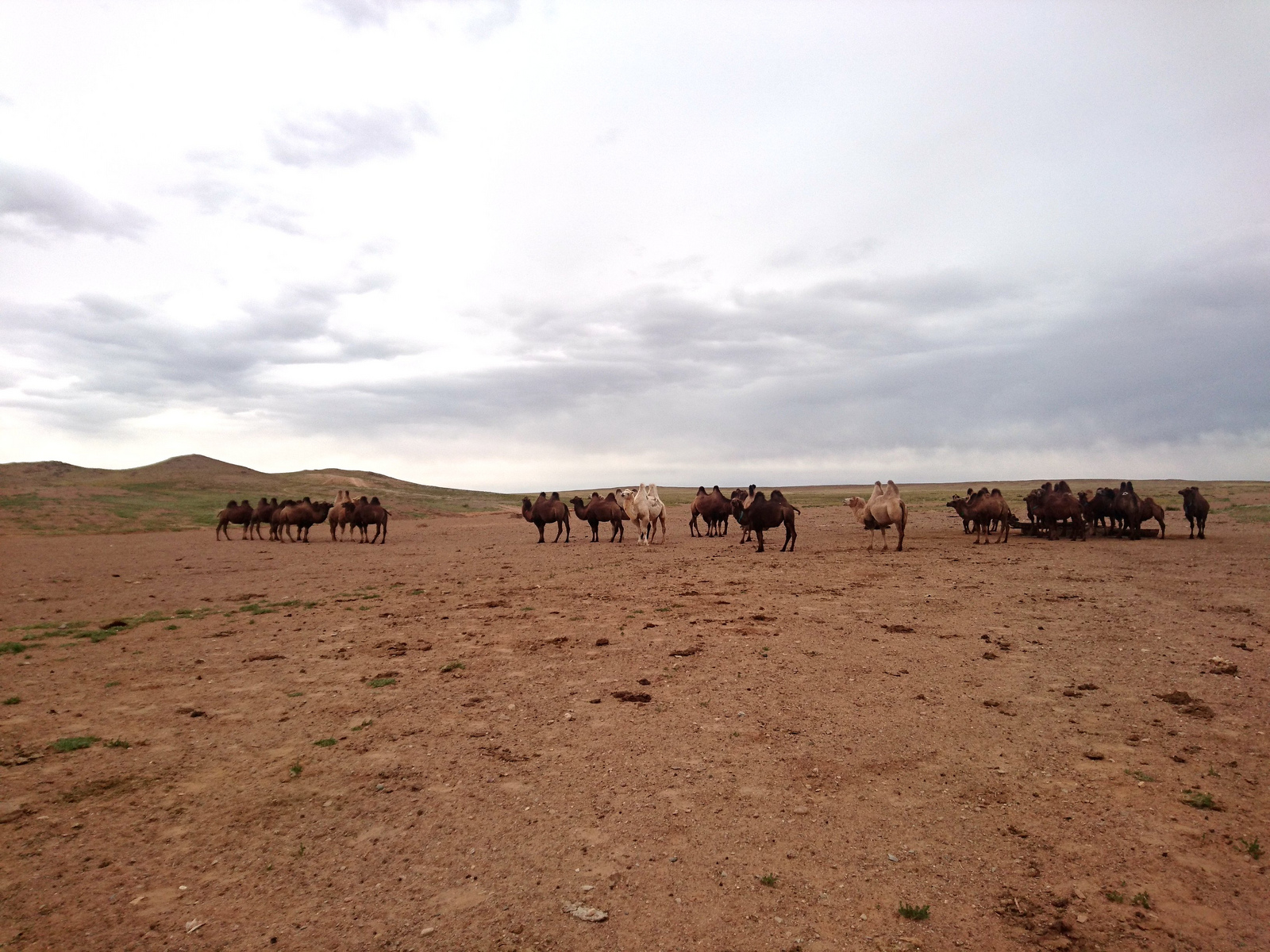 Late in the afternoon, we left the paved road and drove to our first camp spot. Mongolia has only very few paved roads between Ulaanbaatar and some bigger cities in the rest of the country (and “bigger” really doesn’t mean that big here, UB is really the only city that is worth to mention). Apart from that, roads are non-paved dirt roads through the country side. They range from relatively good tracks where you can sometimes go faster than 50 km/h on average to tracks that have huge potholes where you cannot really drive faster than walking speed.

We spent our first night camping in a really beautiful and quiet spot next to some limestone cliffs. From that point on, I really felt that we had arrived in the desert. 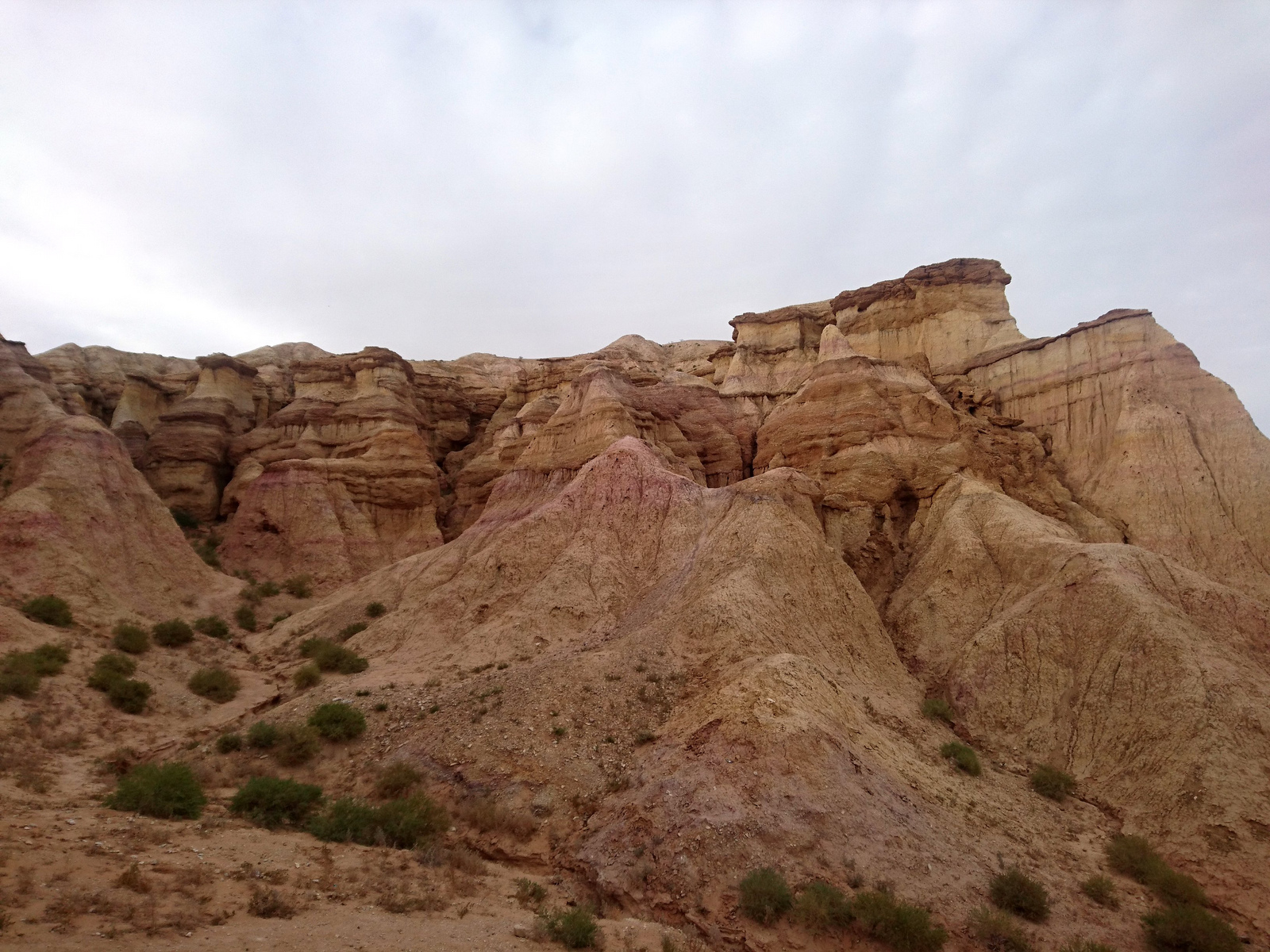 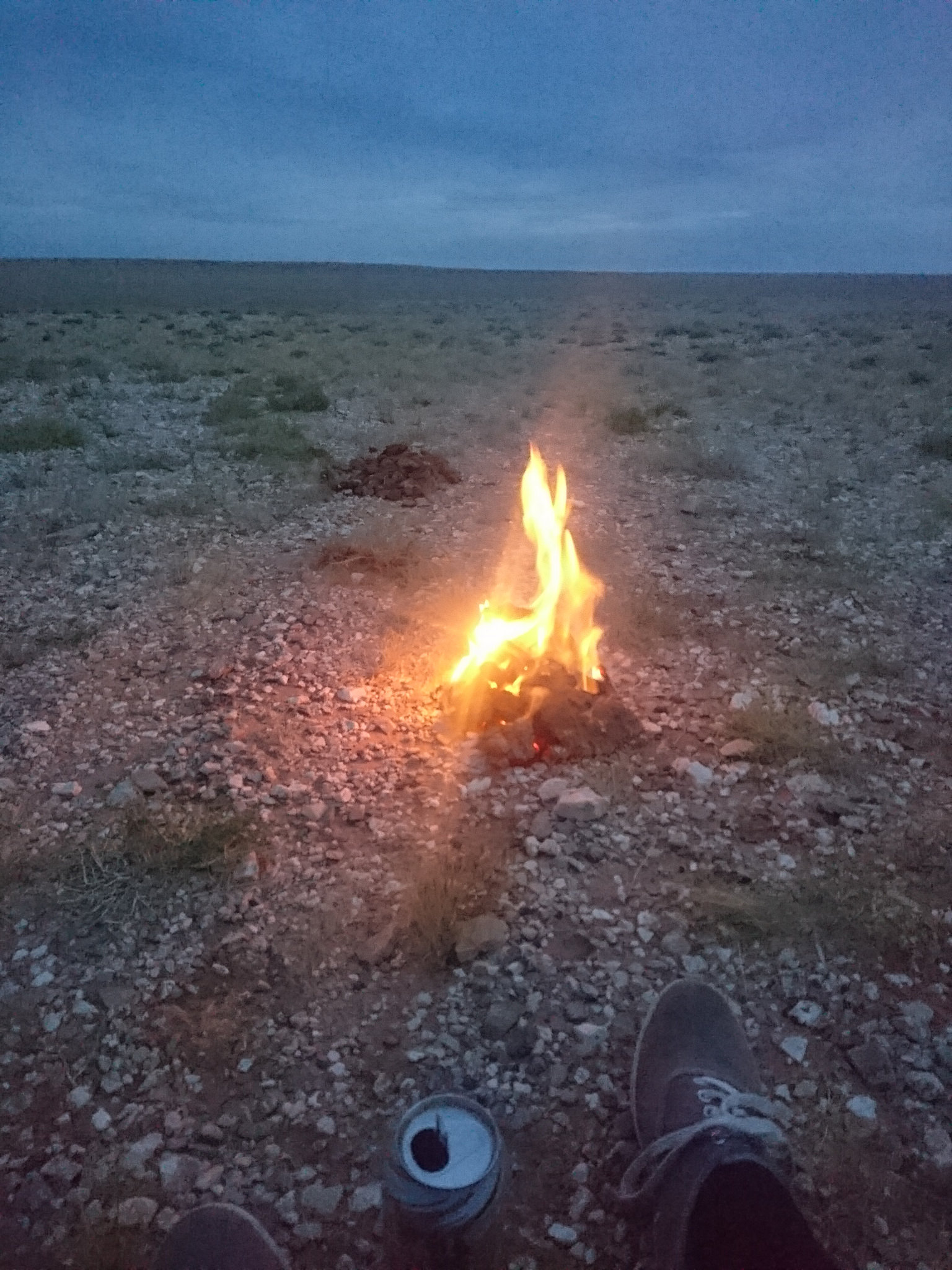 How to you do a camp fire in the desert where there isn’t any wood? We tried camel shit and it really burns perfectly and doesn’t smell bad at all.

The Gobi is not one clearly defined area that looks as one might typically imagine a desert, but rather the general name for a large arid region in Central Asia. Almost half of Mongolia (basically the complete south of the country) is called Gobi. There are many different kinds of landscape, the only common thing among them is that everything is very dry. On the second day, we left the paved road completely and were driving for several days on dirt tracks deep into the desert, and everyday we could see completely different landscapes. On the second night we camped on a large plain that stretched endlessly into every direction 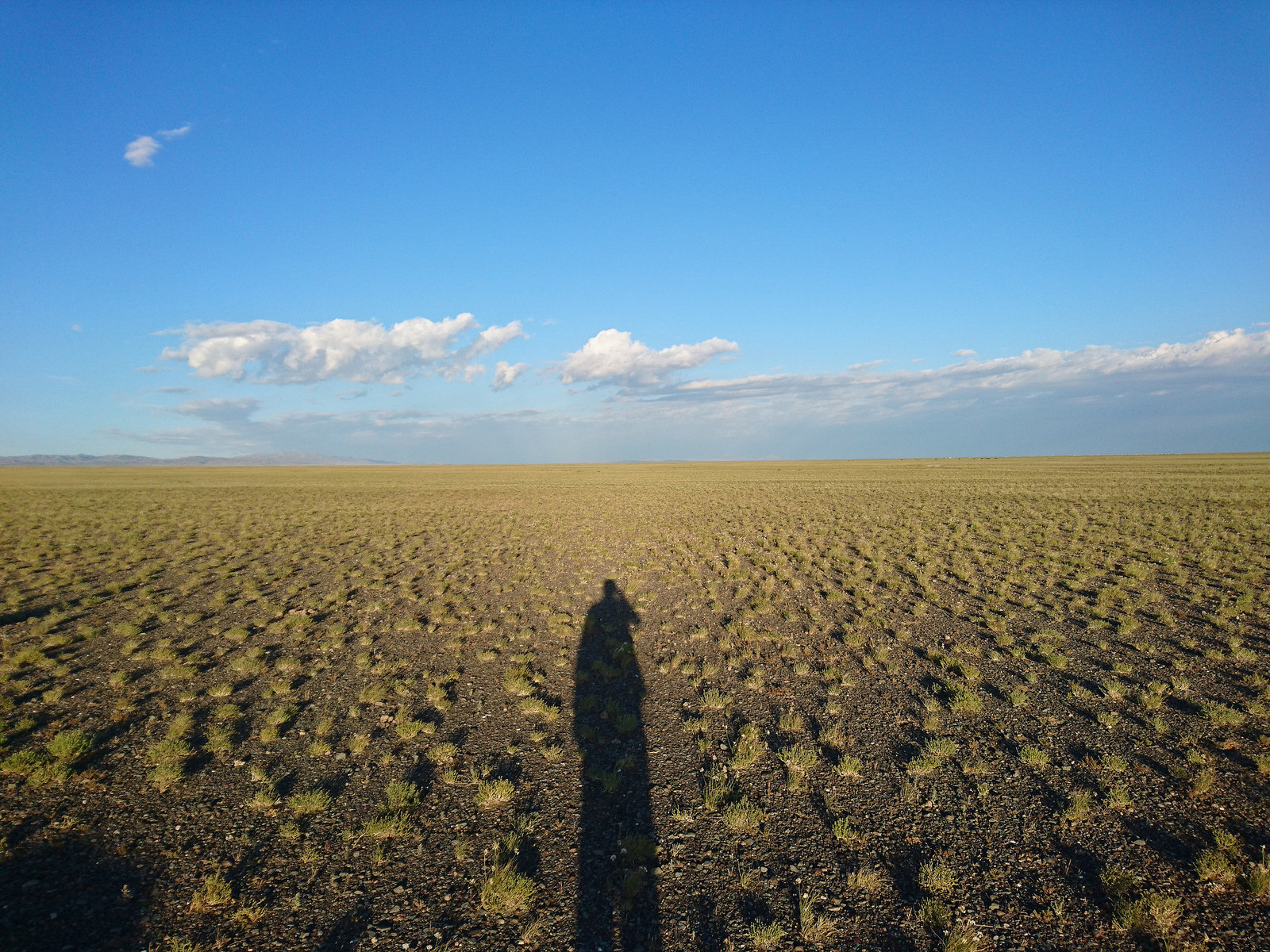 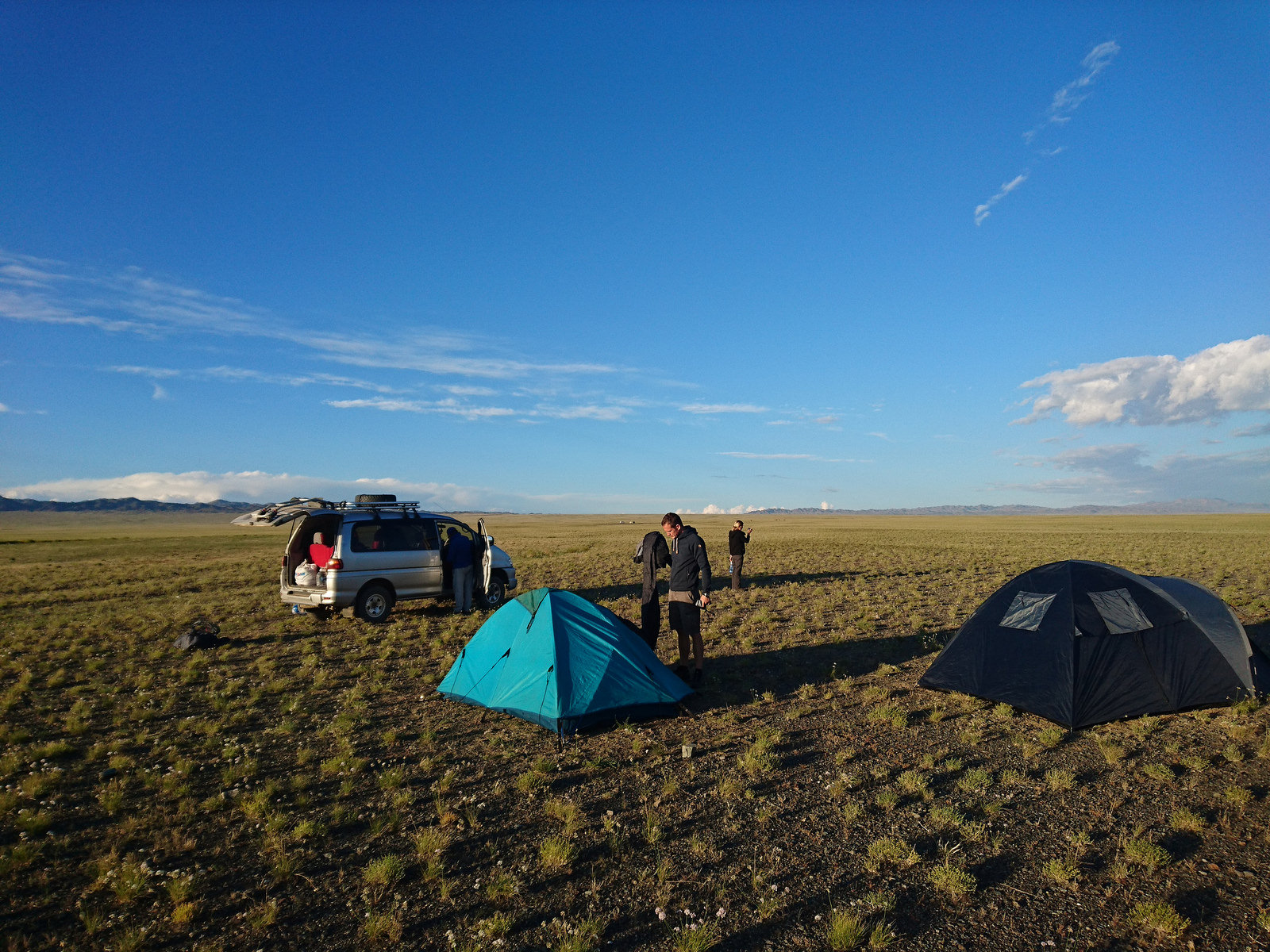 and on the third day we arrived at Khongoryn Els, one of the most famous places in the Gobi and the only area where there are actually sand dunes. 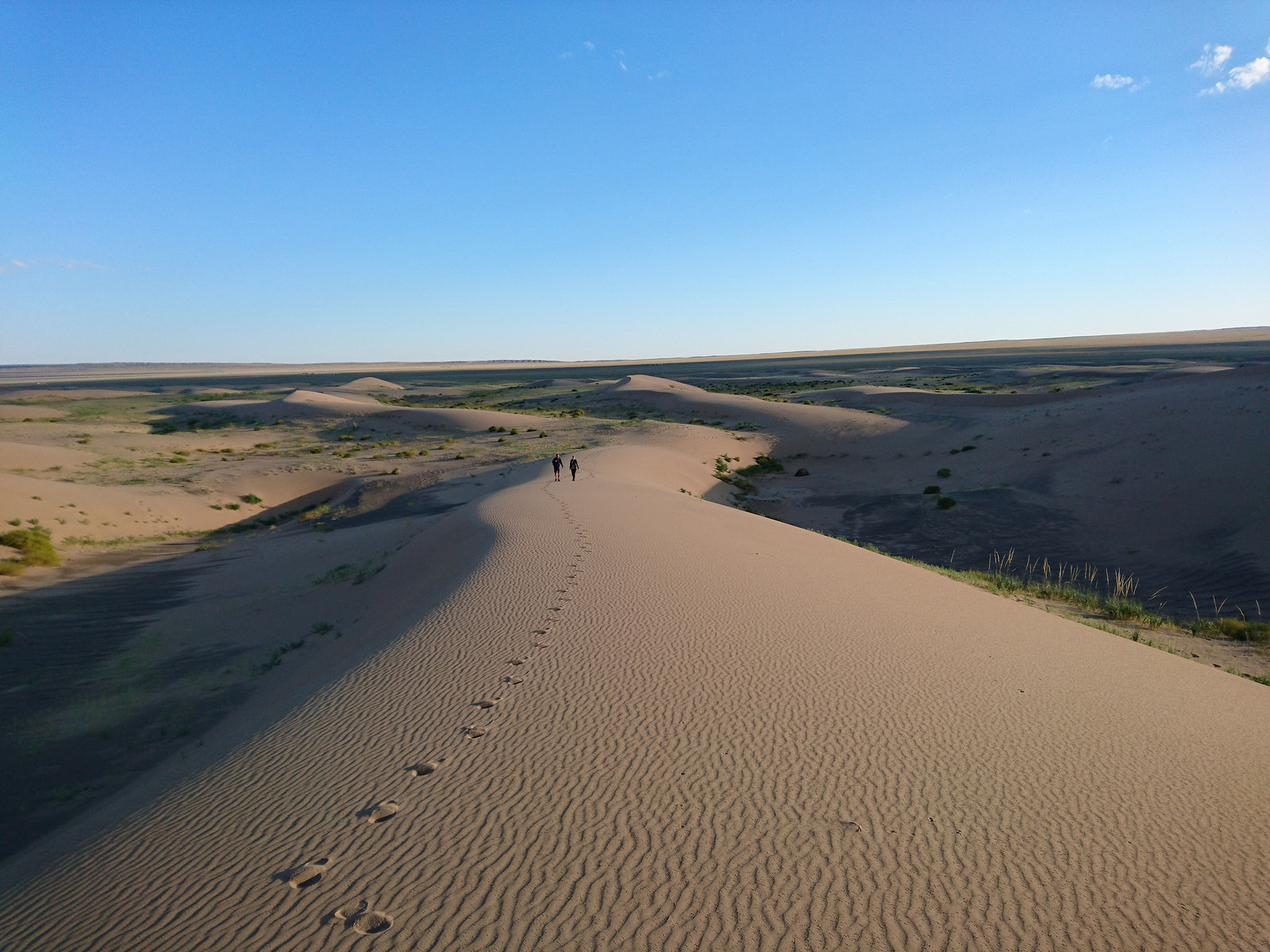 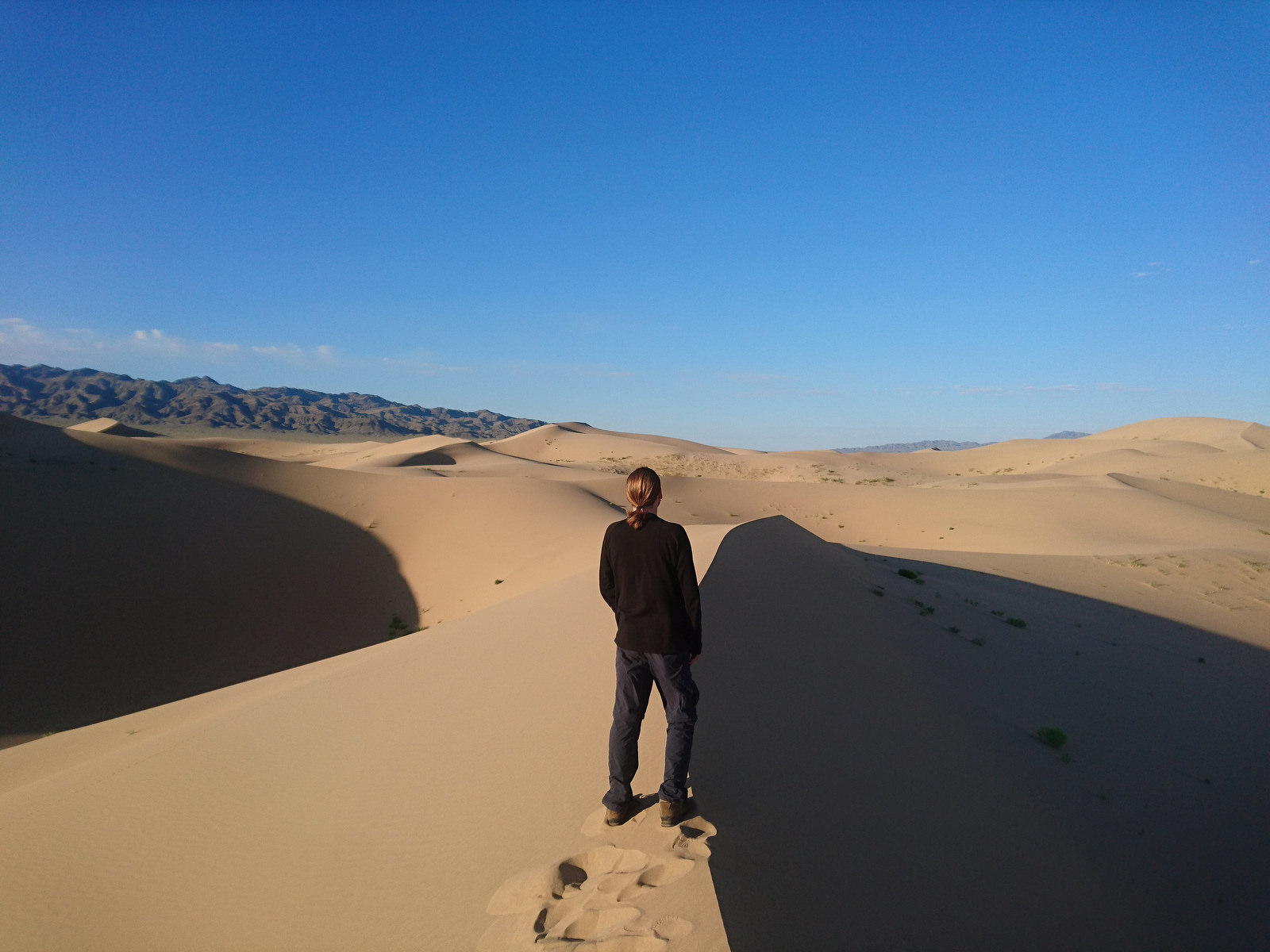 From there, our driver took us to the north through a small mountain range to Bayanzag, an area of red sandstone cliffs. We spent the night there and watched a beautiful sunset that turned the cliffs into deep red and orange colors. The nickname of this area is “Flaming Cliffs”, and at sunset and sunrise you can clearly see where this name comes from. 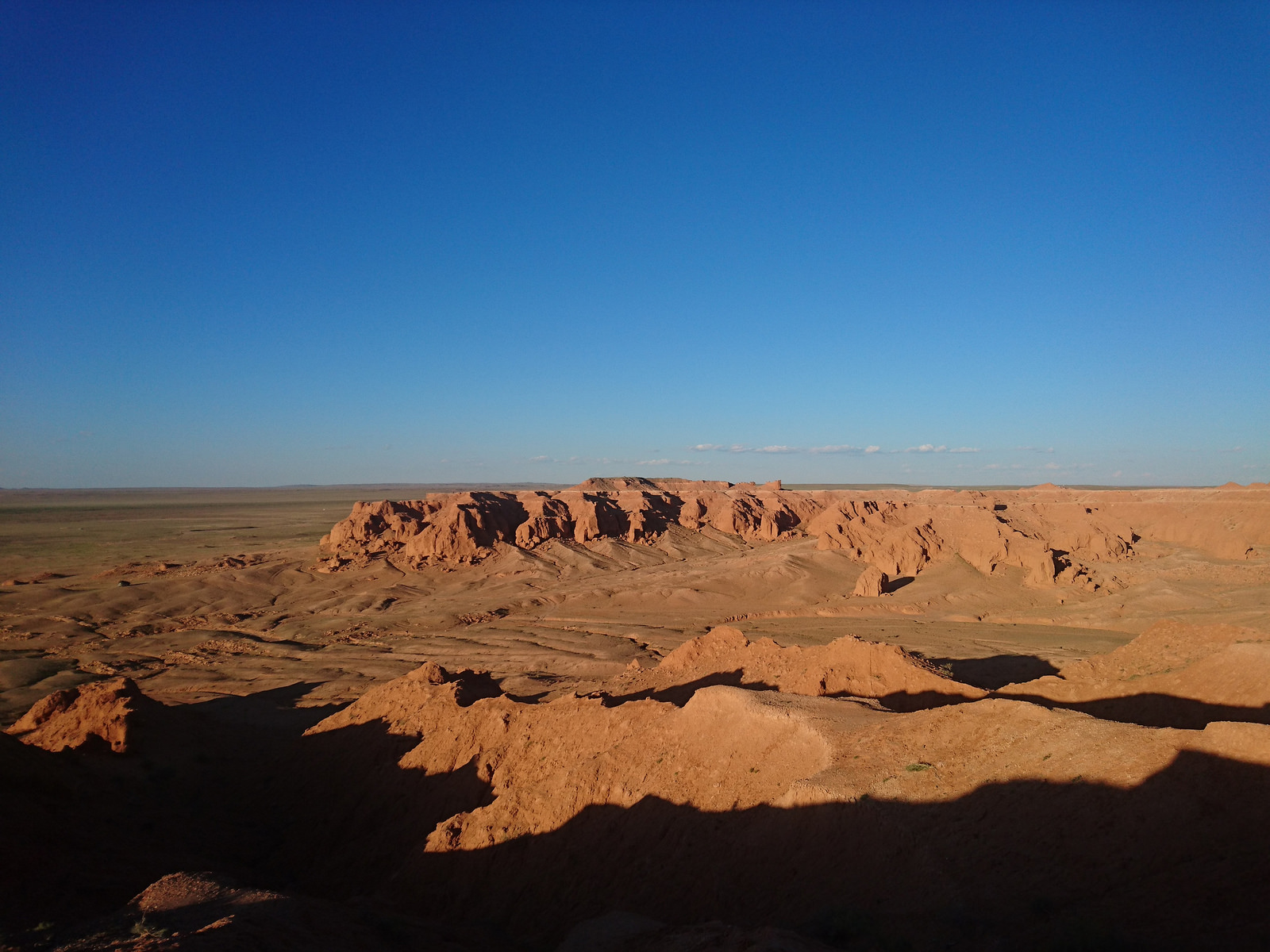 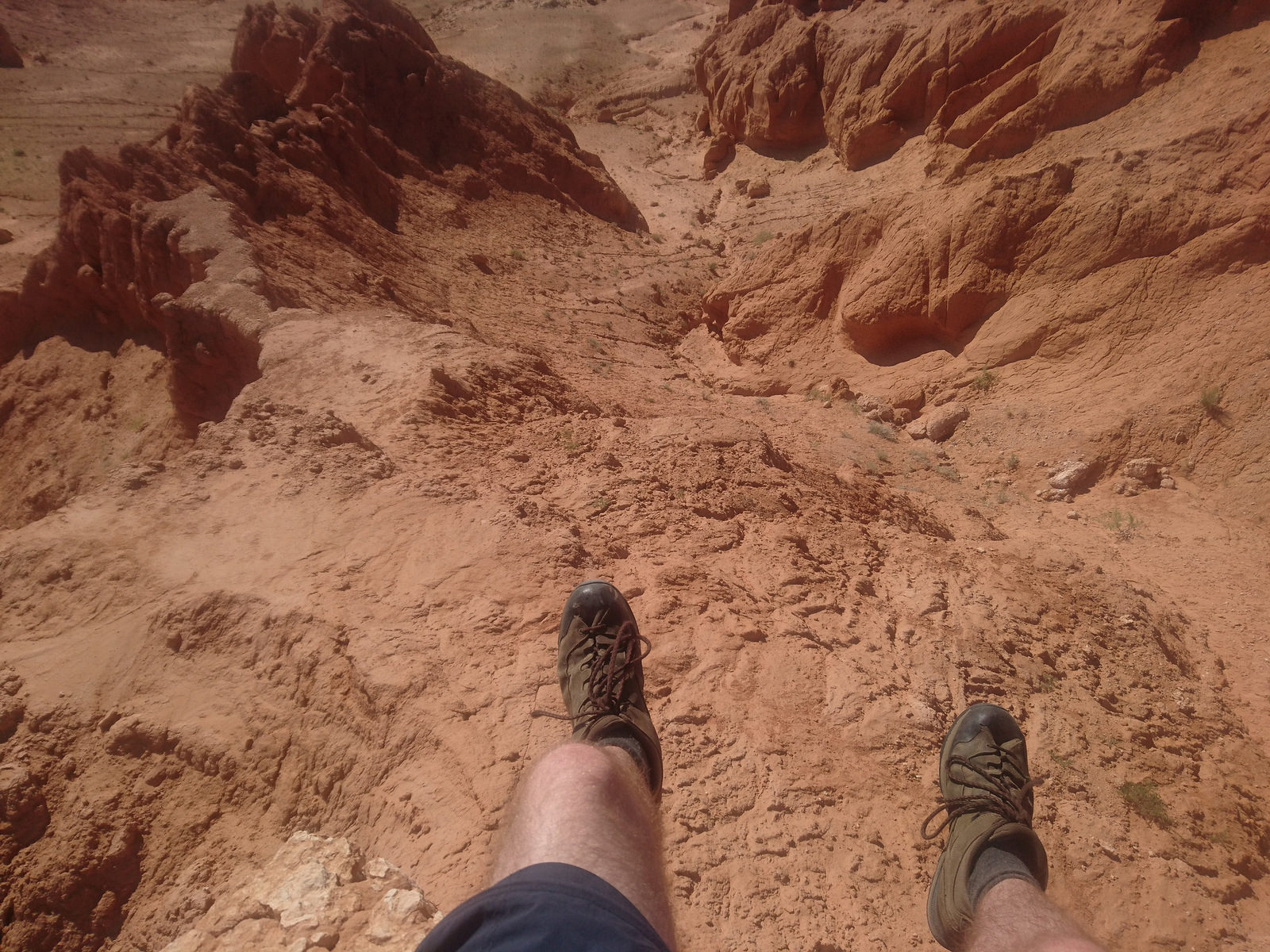 Bayanzag is also famous for its dinosaur fossils. In fact, the Gobi is one of the best places in the world for finding dinosaur remains. At the time dinosaurs lived, the area had a totally different climate with very good conditions for them. When the area later turned into a desert, the conditions became good for preserving the fossils in the ground. Bayanzag is the first place on earth where dinosaur eggs (and actually whole nests) where found. Close to the cliffs, Velociraptor and Tyrannosaurus skeletons have been found. Apart from the dinosaurs, there are also legends about the Mongolian Death Worm, which is said to be a thick-bodied worm more than one meter in length that can spew deadly acid into your face. Unfortunately, the fossils cannot be seen in this area anymore, and there was also no sight of the death worm.

One thought on “Gobi Trip”