When arriving in Moscow, the first impression is that simply everything in this city is huge. The city itself, the buildings, the streets, even the sidewalks for pedestrians. Or the malls, as the one shown in this picture… 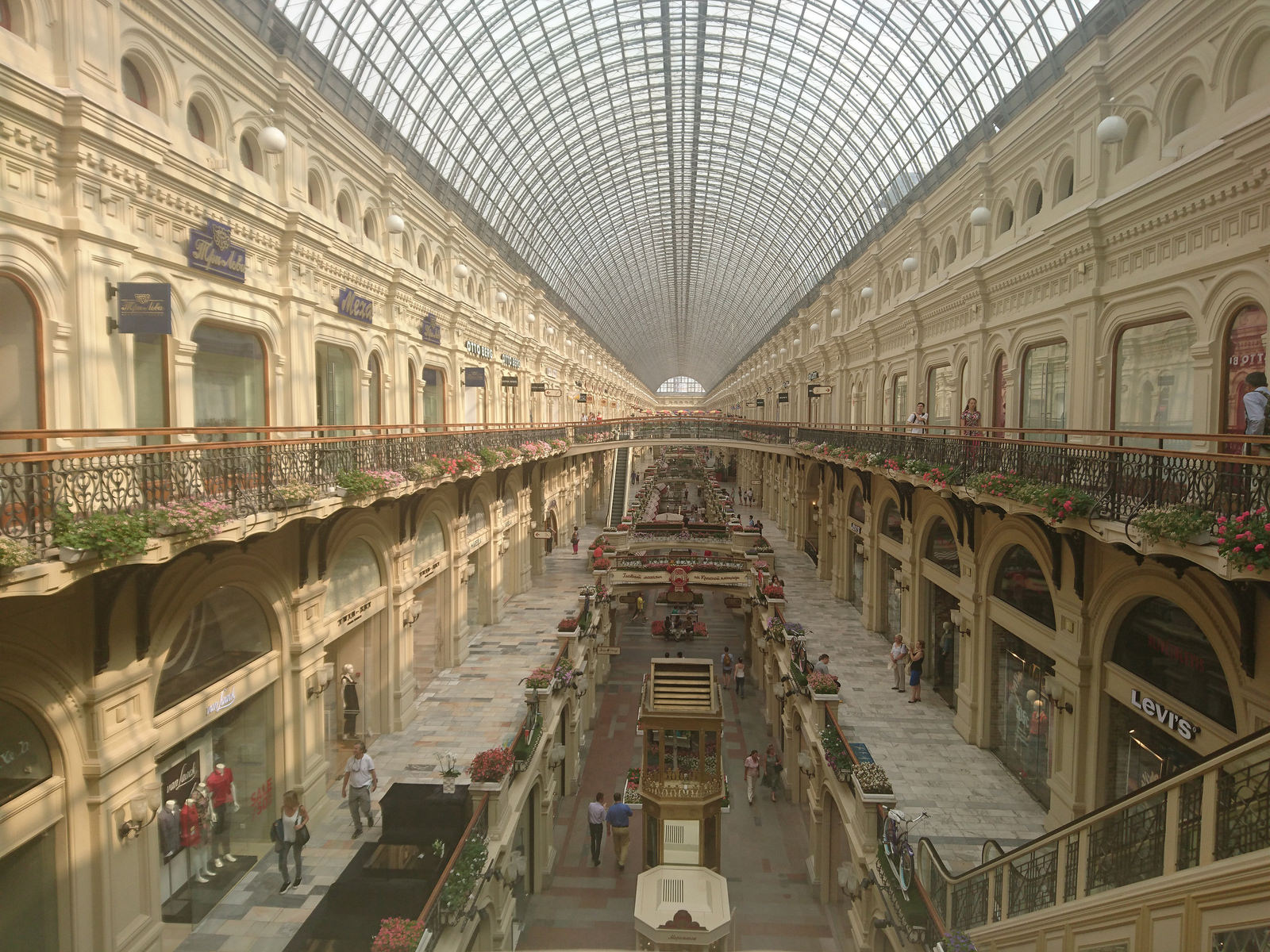 I took the metro to my hostel, and was immediately impressed of how the stations look – there are really high ceilings, big chandeliers and walls that look like marble. Indeed I was told that the metro stations are a sight for themselves. The first stations where built during the Stalin era, in a particularly impressive way to show the brilliance of the Soviet system also for the everyday life of the common people.

As in Warsaw, I could only spend less than 2 days exploring the city. Moscow is so huge that this leaves only time for doing a our of the most important sights in the city centre, so on the first day I went there to see the Bolshoi Theatre (which I always assumed was named after some famous guy called “Bolshoi”, but actually it just means “Big Theatre”), the Red Square as well as the Kremlin which stand just besides the Red Square. 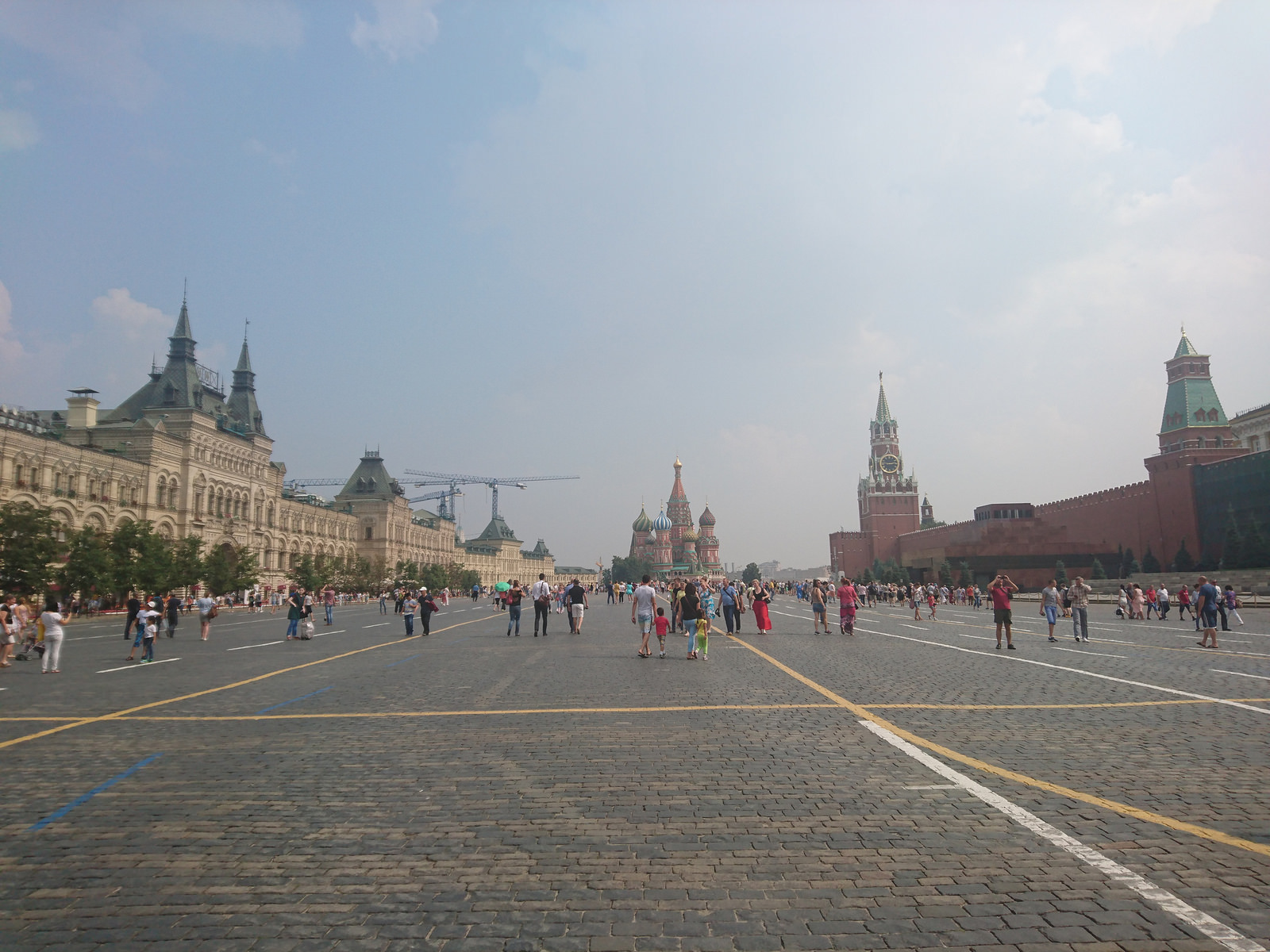 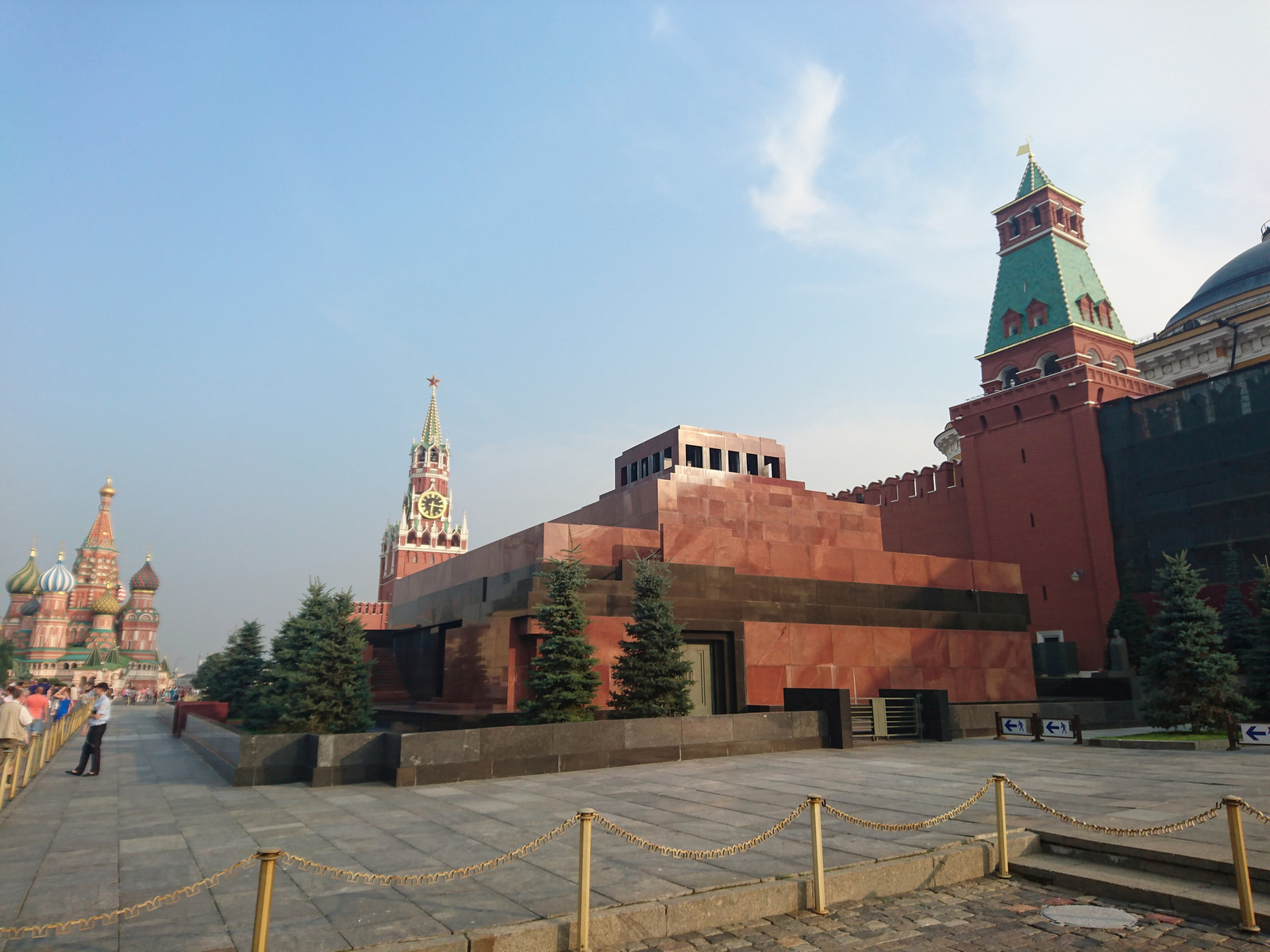 The picture above shows Lenins mausoleum, where he apparently can still be seen in a glass coffin or such. I was told that it is possible to go inside and have a look at him for 3 hours every day, but also that I would have to wait in line with thousands of tourists. As I knew how he looked anyway because he can be seen on probably thousands of statues, pictures etc in every Russian city, I skipped it. 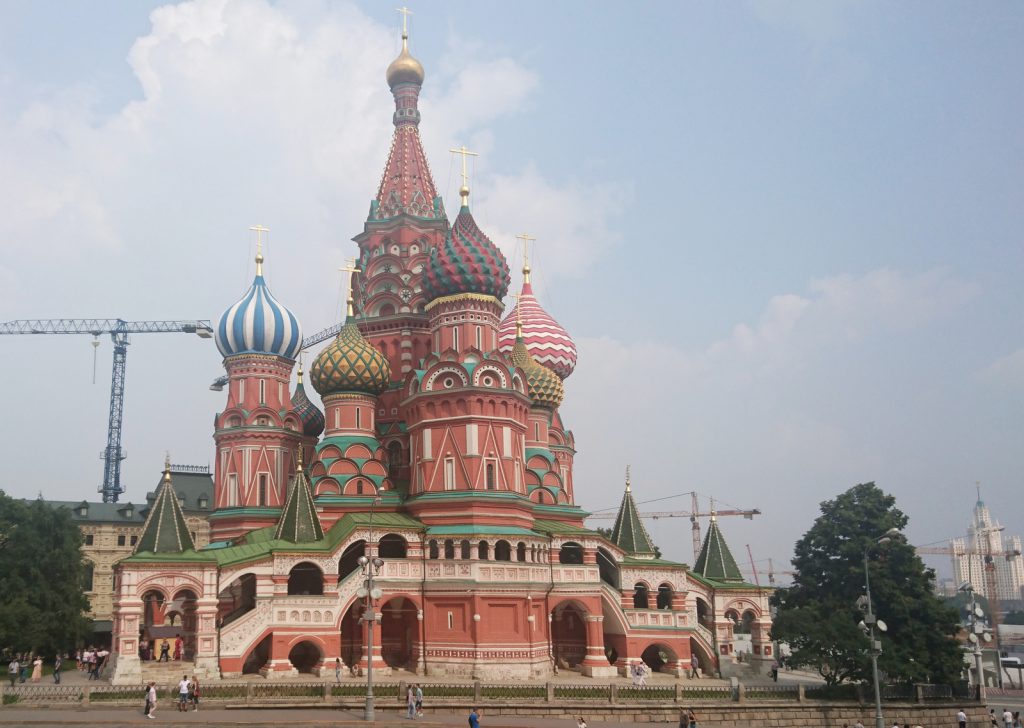 The above picture shows St. Basils Cathedral, standing also on the Red Square. The shape of the orthodox churches with its onion-like towers are kind of well known, but this one is particular because its design is so colourful. Looks a bit like candy, I think… So maybe you would ask, what kind of person would build such a nice looking church? Must be a friendly guy for sure? Actually it was this person: 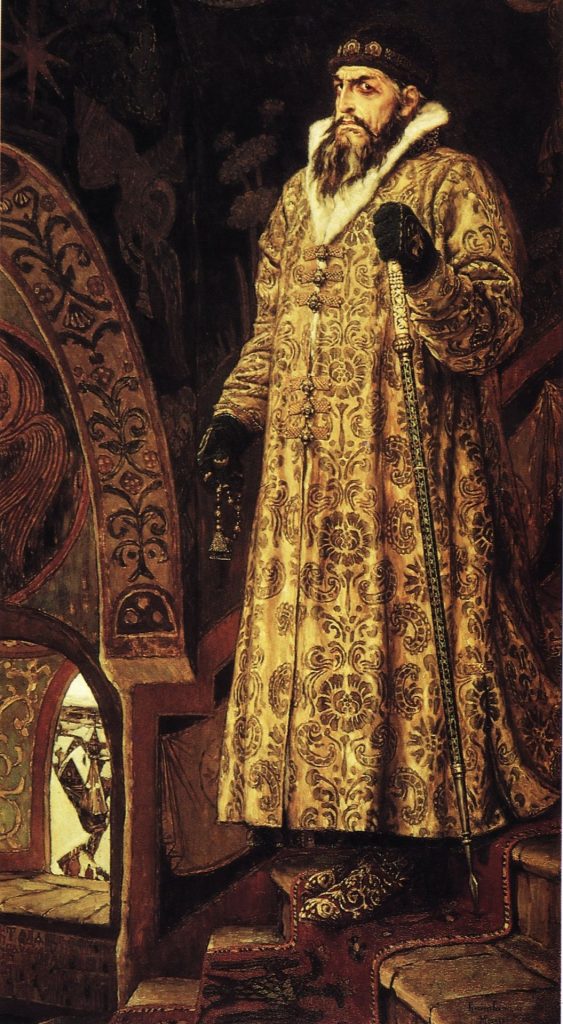 His name was Ivan the Terrible, first czar of Russia and a very important person for Russias history, but also known for mental instability and extremely brutal behavior (like killing is own son in an act of extreme rage). When the cathedral was done, he apparently ordered to stab out the eyes of the two architects so no church as nice as this one could ever be built.

The second day I went a bit out of the centre to visit a park that is dedicated to russian space exploration and has a nice museum about this topic. However, as Russias time as a great space power has been over for some years and the recent programmes where not that succesfull, the focus naturally was more on the times a few decades ago, with little info about what happened after the 80s.

In the museum there were mostly groups of chinese tourists, and I noticed an interesting pattern in their behaviour. The museum displayed a couple of life-size replicas of kosmonaut (russian astronauts) modules, like the landing capsule of kosmonauts for returning from the MIR space station, the capsule in which Laika, a dog and the first living being in space, was shot into orbit, etc. They all had small windows to look inside and get a feel how it was to be in there (mostly it was very squeezed).
The chinese tourists where cuing in large groups next to those capsules, and really everyone wanted to have a photo of himself next to each of the capsules (I don’t have any photos, because I didn’t want to buy the photo permission at the entrance). The funny thing was that 90% of them didn’t even bother to look through the windows. They obviously didn’t give a shit what was inside, they just wanted to have a photo with them and the object, because, well, if it is in a museum, it must be important, right?
What topped the absurdity was that the windows were so small and the inside badly lit that on the photos, it was impossible to see what was inside the capsules. So what the people can show at home are a lot of photos of them next to big spherical or cylindrical objects, and they won’t be able to explain what is it they are standing next to, because they didn’t bother to look inside.

A thing that is quite a problem in Russia is often the language. English is not widely spoken, so communication can be quite difficult for a tourist. In the space museum, there was some sort of english audio guide and sometimes short english explanations about items, but it was still 90% only available in Russian. Luckily nowadays you have lots of technologies to help you, from apps to learn russian (which I used to learn at least the cyrillic letters, it actually worked quite well) to translation apps like Google Translate, which is particularly useful. Today this app is so advanced that you can point the camera to something that you want translated and the app displays the translation inside the picture. Sometimes it works really well. Sometimes it doesn’t really. Like when I wanted to know who is the guy whose statue stands below the huge monument with the rocket, Google translate told me… 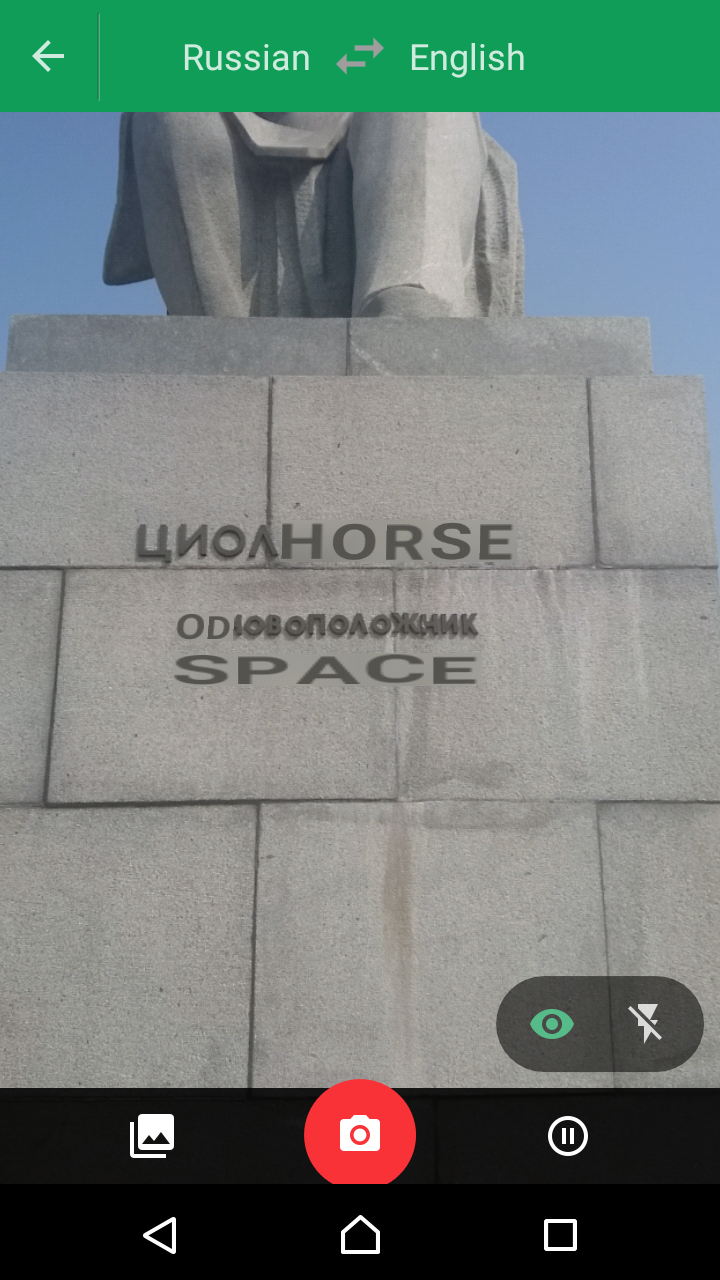 I guess “Space” is right. Not sure though what the “Horse” should mean in that context?