In fact, China doesn’t want anyone right now. At least not travellers that are in Mongolia and try to get into China from there. It had never been a problem to organize a Chinese visa in Mongolia, but apparently now it is, and that is the reason why my great overland-to-bangkok project has failed and I am forced to fly towards my destination instead of taking the train.

The long story: For every long term traveller, one of the most annoying things is to organize visa for the countries we travel to. As a citizen of the western world, this is often not too much hassle, because there are very many countries where we don’t need a visa at all (in fact, the german passport has been ranked the “most valuable” in the world in 2016). In general, especially as a EU/Schengen-citizen we are so spoilt by the fact that we can just cross borders without even noticing it that we sometimes tend to forget that it can be quite difficult to enter in certain countries. And if you need a visa, they can often be bought directly at the airport when you arrive.

There are some notable exceptions however. For instance, Russia has pretty strict visa regulations. I got my tourist visa without problems because I was doing the GBT project, and GBT is a non-profit organization that is able to send official invitation letters to its participants so they can get the visa easily. I also needed a transit visa for Belarus, just for crossing it by train.

Nothing of that prepared me for what I had to experience when I tried to get the chinese visa though. The first time I tried to get it while I was still in Germany. There is a visa center in Frankfurt where you can go to, hand in the application, pay the fee and wait a couple of days until you have the visa in your passport. That is the theory at least.
In reality however, there are quite a few obstacles. One of them is that your application needs to contain the complete travel schedule – how you get into the country, how you leave it, and where you are staying at which time – including ALL bookings of flights and hotels. That is already a bit ridiculous, and backpackers who travel spontaneously obviously cannot tell months in advance where they will sleep at a specific date. Anyways, today there are websites like booking.com where you can book hotels with the right to cancel the booking until 1 day before the planned stay. So you book the hotel, print out the confirmation email, add it to your application and then immediately cancel the booking. That is sufficient, and it is also totally useless because the chinese know about the fact that it is basically a fake booking, but they just want to have a consisten travel schedule for whatever stupid reason.
My problem back then was that I planned to enter the country by train from Mongolia and leave by train to Vietnam. I couldn’t book these trains from Germany, because they cannot be booked from outside the country (and even inside the country not more than 60 days in advance), but I needed a booking confirmation for at least one of those trains to apply. As this wasn’t possible, I decided to skip the visa application in Germany, and instead would apply for it in Mongolia, because I had heard a lot of stories about how easy travellers get the visa there.

A few months later I finally arrived in Ulaanbaatar and immediately asked how to get the visa. A lot of travellers do the same and it is kind of a standard procedure, and at that time it sounded fairly easy: Go to the embassy, hand in the application, pay 30$ and pick up the visa one week later. It is so common that there is actually a travel agency in UB that knows about the problem that backpackers travel spontaneously, but need a consistent schedule with flight reservations: You can simply walk into that agency and ask for a “flight reservation” to China. These super nice people there know exactly what to do then, they just print out a paper with your name that says you have a reservation for a flight into and out of the country, give you this paper and cancel the reservation immediately afterwards. So basically it is a fake booking, just as the hotels on booking.com. I am sure the chinese embassy knows that this agency provides fake bookings, but they just don’t care about it, as long as your schedule in the visa application is consistent.

So I prepared my application including the fake booking.com and flight bookings and went to the embassy. They are open 3 times a week, and because there are MANY people applying for a visa, you have to be there very early and stand in the cold for 2 hours, waiting in a line. 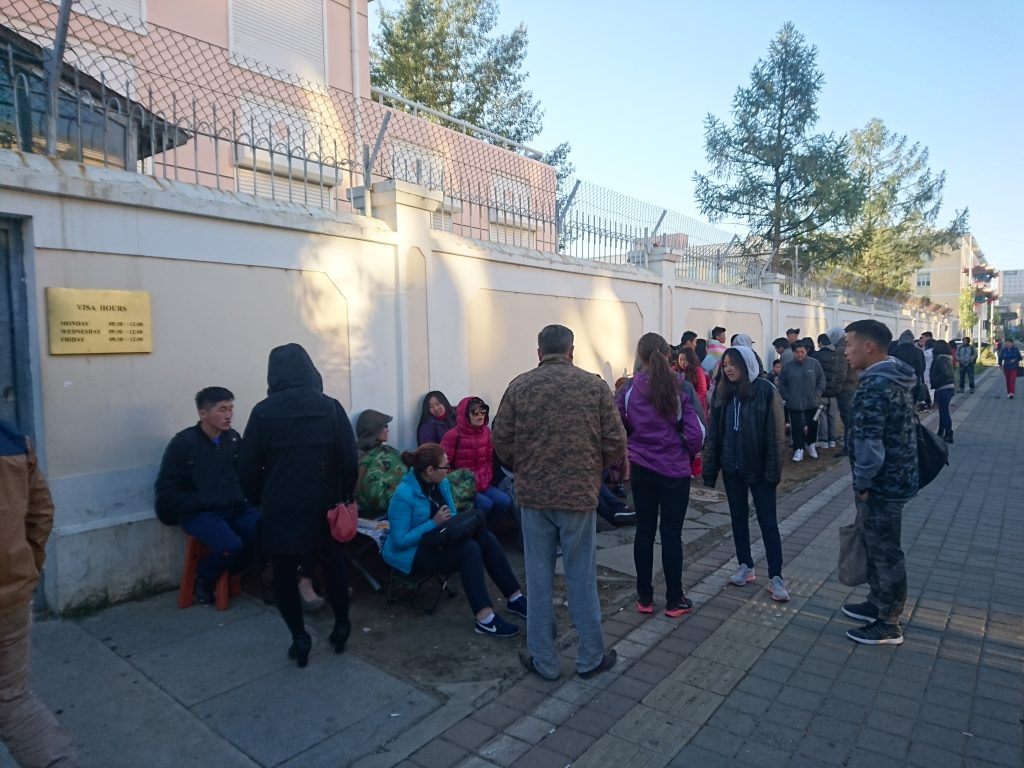 After 2 hours I got in, gave them my application and left without having any further problems. I was told I could pick up the visa the following week, but as I had already planned the Gobi tour for that week, I would just come one week later and get the visa.

Fast forward ten days, I had just come back from the Gobi trip and was ready to go to the embassy again. At that time, people started to tell weird rumours about people getting rejected at the embassy and no one would be able to hand in applications anymore. I was a bit irritated, but as I had already given them my application, I didn’t really worry. The following day I went to the embassy. I waited 2 hours and heard more rumours in that line about many people having problems. When I got in, the lady at the counter gave me the passport and just pointed at a hand written sign in the window saying “For technical reasons, foreigners to not receive Chinese visa”. I looked at my passport, and found this inside 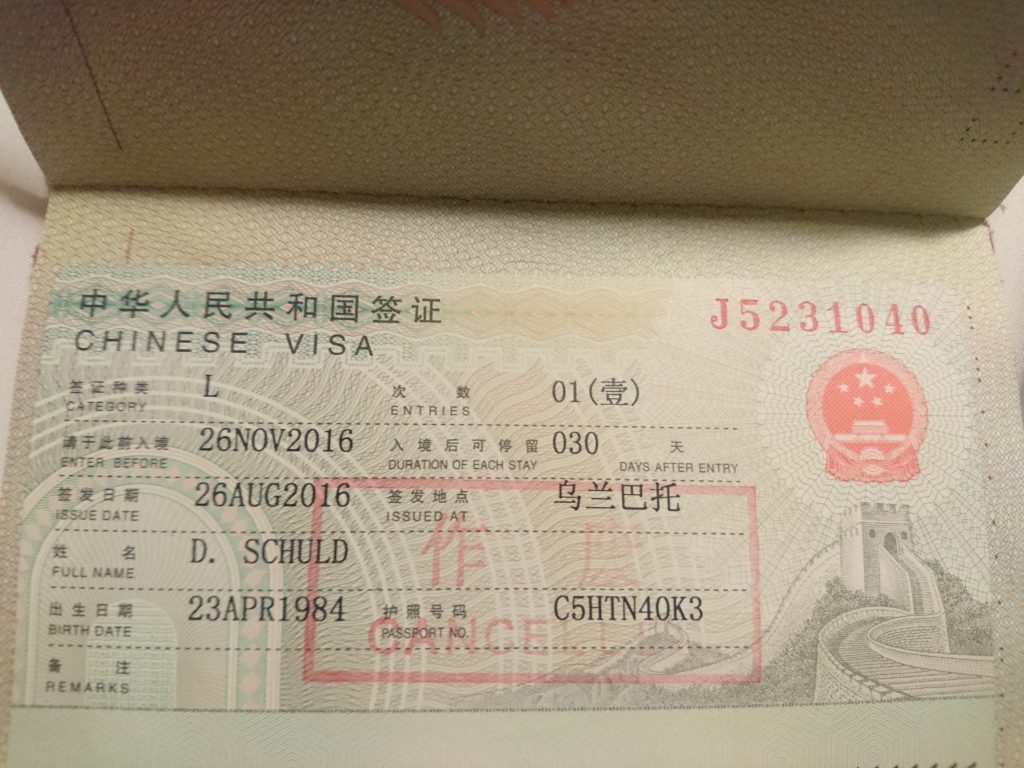 Do you see the “CANCELLED” stamp on it? They had actually put the Visa in my passport, but apparently afterwards they decided to not give me the visa afterall and invalidated it. I tried to ask what the fuck was going on, but no one was willing to give any further information. At that point, I felt like I would just explode on the spot and take all those ignorant officials with me. They also told me to get a refund from the bank for the 30$ I paid (in the end, of course the bank didn’t give me my money back).

I was VERY annoyed, but I had stil 3 weeks in the country and I was optimistic that whatever was going on here, it would be a short time issue and I still had time to sort out everything. So I went on my trip to Central Mongolia, and when I came back another 2 weeks later, I tried the whole procedure again. I printed out my hotel bookings, went to the agency again to get the “flight reservation”, filled in the application and went to the embassy a third time. At that time, everyone had heard about the problems, everyone was talking about it, but no one knew what exactly the problem was. Again we waited 2 hours until the embassy opened. This time, a guy of the embassy stood at the entrance and held this paper in the air 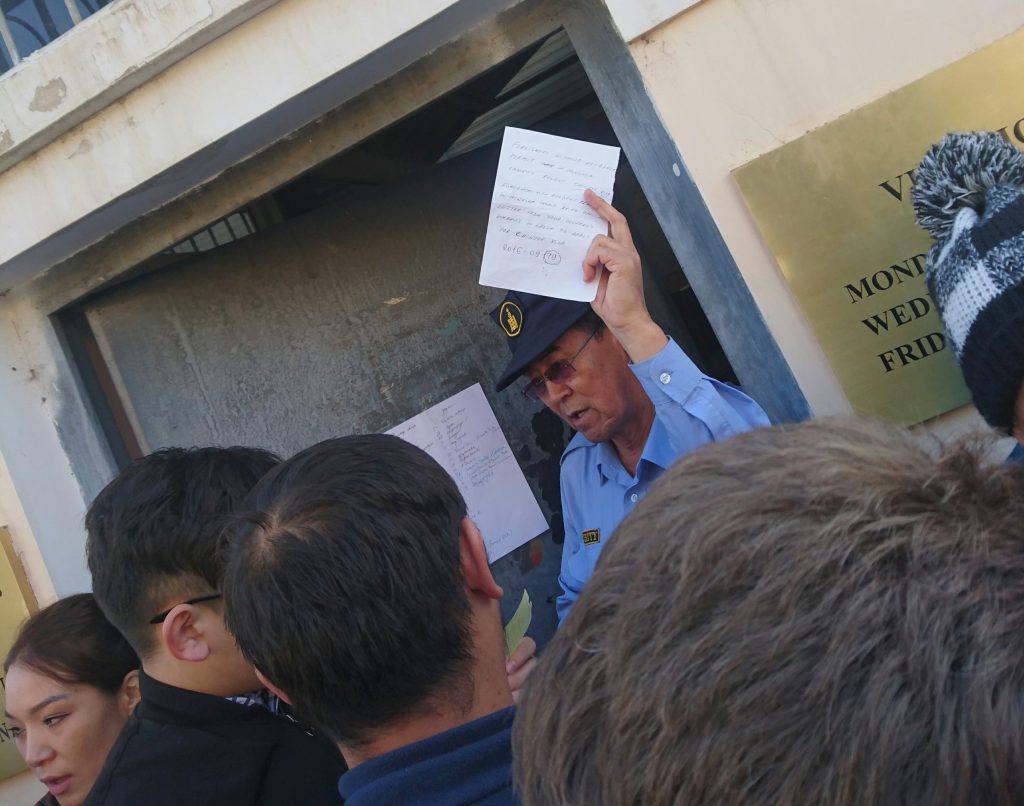 It simply said “Foreigners without residency permit in Mongolia do not receive chinese visa”. That was all, no further explanation.

Now, as a country you are in the convenient position to be able to do whatever the fuck you want (like letting people wait in the cold for 2 hours, then letting them in and tell them to go away again), and when yor are asked why, you just give a smile and a middle finger as the reason (that was not exactly what the people in the embassy did, but I am sure they would have done it if they were allowed). And as a tourist, you cannot do anything about it, you can try and try again until at some point you have to realize that it is over. And this is why I won’t go to China, and instead I am sitting in a plane right now, towards… Bangkok. Because spontaneously flying out of Mongolia is fucking expensive, and the only affordable flight that brings me closer to my planned route is going to Bangkok, the place that I had planned as my final destination and where I never planned to arrive before beginning of next year. Ironically I am flying via Beijing, so I will at least have a couple of hours time to look out of the airport windows into this great country that apparently has technical difficulties that prevent travellers to enter it.

I don’t really know yet what I will do once I arrive in Thailand, I will likely get out of Bangkok as quick as possible because I was so fixed on the idea to arrive there next year, by train, that I don’t really feel that it is the right place right now. But I will continue to travel through South East Asia for the next couple of months, and as a positive aspect of the whole story, I will have more time to see the countries down there. I am thinking about spending time in Myanmar, which seems to be really interesting but I thought I wouldn’t have the time to visit it. I might also try again to get a chinese visa in a couple of months and still go to China, but for now, I am done with that country.
I guess what that teaches me is that whenever you try to make big plans, you shouldn’t focus on them too much and always take into account the possibility that things might change very fast and you have to adapt to it somehow. And especially while travelling, it is better to not focus on a certain plan so much that it annoys you when something doesn’t work out as you planned it. Anyways, the area where I will go to now is definitely not the worst place on earth.

3 thoughts on “China doesn’t want me”